“The Sleepers” by Walt Whitman 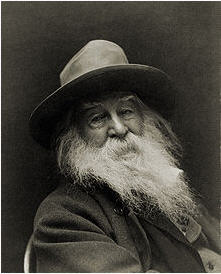 I read this poem today while sitting outside under a shady tree in my backyard. I think that reading Whitman outdoors adds to the experience.

The general metaphor running through the poem is that of sleep representing death. I found myself drifting back to Shakespeare: “To sleep, perchance to dream.” Whitman also equates awakening with rebirth in a way that makes me feel that Whitman believed in the concept of reincarnation. Finally, sleep is portrayed as the great equalizer, to which all must at some point succumb.

There is one particular word that caused me to contemplate this poem more deeply, and that is “infolds” in the following line: “The night pervades them and infolds them.” Now, it’s possible that Whitman meant “enfolds,” but I’m not convinced, and “infolds” changes the meaning completely for me. I see enfolding as enveloping and covering, as opposed to infolding which I interpret as folding in upon oneself, more like internalizing. So if you look at the line like that, death causes one to infold and internalize all of the physical self into the spiritual self, or the internal. This would be similar to the concept of your life flashing before your eyes at the moment of your death.

Click here if you’d like to read this poem online, but you may want to print it and read it while sitting outside under a tree.

Comments Off on “The Sleepers” by Walt Whitman