History Repeating Itself in Europe 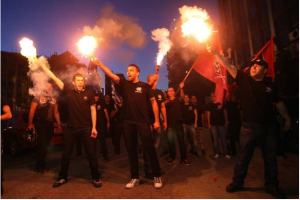 While scanning the news on my iPhone this morning, a story caught my attention regarding the rise of a group calling themselves the Golden Dawn (click here to read the article on the Washington Post website). I know about the unrest in Greece, but had not heard anything about this group. What I found the most disturbing is that, once again, an ultranationalist group is using the occult as part of their identity. This was done by the Nazi party in Germany and it now appears that history is repeating itself.

The Hermetic Order of the Golden Dawn was an occult group that was very influential in Europe during the late 19th and early 20th centuries (click here to read more about the Golden Dawn). Some of the more well-known members included Maud Gonne, W. B. Yeats, and Aleister Crowely. The group was influenced by a variety of mystical concepts, including kabbalah, Hermiticism, alchemy, and Freemasonry.

Throughout history, political groups have used symbols to justify their power, and mystical symbols have proven to be some of the more powerful and successful. I do not know if Greece’s Golden Dawn actually uses any of the iconography associated with the Hermetic Order of the Golden Dawn, but regardless, just using the name evokes images of power.

Our world is changing at an unbelievably rapid pace, and people who fear this change or are unable to keep up are eager to find scapegoats. In Nazi Germany, it was the Jews; in Greece, it is immigrants; in the United States, _________ (you can probably fill in the blank, depending upon which end of the political spectrum you are). The fact is, when we blame a group for our problems and start using religion or symbolism to rally the masses against that group, we are treading on dangerous grounds. History has a tendency to repeat itself. Let’s hope that we don’t repeat some of the darker chapters.