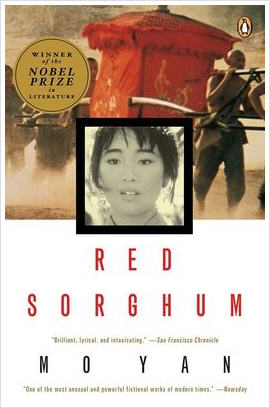 When I read that Mo Yan was awarded the Nobel Prize for literature, I figured I should read one of his books. I had never heard of him before he won the award, but hearing that his style of writing was dubbed “hallucinogenic realism,” it sounded right up my alley. I looked up some of the books that he had written and decided upon Red Sorghum.

I really enjoyed this book, but I have to warn you that there is some pretty disturbing material here. The story takes place in China in the 1930s during a war with Japan. The depictions of the atrocities inflicted upon the Chinese peasantry by the Japanese soldiers are brutal. There is one scene where the soldiers forced a Chinese man to flay his friend as the villagers were forced to watch. I am by no means squeamish, but this even made me uncomfortable.

In contrast to the scenes of graphic horror, the novel is filled with a magical beauty reminiscent of Marquez. Family myths and stories are related in a non-linear weaving against a stunning backdrop of rural China. The imagery of the sorghum fields is prevalent throughout the book and works well symbolically, red representing Communist China, as well as the blood of the slain peasants and the bloodlines of the families.

The juxtaposition between the horrific and the beautiful reminded me of Baudelaire. One passage in particular conjured imagery from “A Carrion.”

… the bloated carcasses of dozens of mules had been found floating in the Black Water River, caught in the reeds and grass in the shallow water by the banks, their distended bellies, baked by the sun, split and popped, released their splendid innards, like gorgeous blooming flowers … (p. 39)

The book also contains brilliant sociopolitical commentary. Although the Japanese are depicted as cruel, merciless people, Yan also presents the Chinese as being vengeful, hateful, and willing to turn on each other. In the following passage, the image of a multitude of dead bodies illustrates the concept that all the peoples included in the tale are essentially the same inside.

I doubt that even the provincial party secretary could have told which of them belonged to Communists, which to Nationalists, which to Japanese soldiers, which to puppet soldiers, and which to civilians. The skulls all had the exact same shape, and all had been thrown into the same heap. (p. 203)

During the past year, there has been a lot of tension in the US between the wealthy and those who are less fortunate. One passage in Yan’s book made me think about this, especially the effects of the constant striving for financial success on the environment and humanity as a whole.

I highly recommend this book to anyone who is not overly disturbed by graphic literature. Yes, the book is disturbing, but it is meant to be so. It is also beautiful and inspiring. And really, isn’t that how life is, terrifying, beautiful, and inspiring all at the same time?