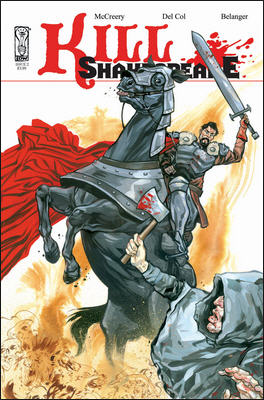 I read the second issue in the Kill Shakespeare comic series this morning and now I am officially hooked. It has proven to be not only well-written, but visually gripping.

The story continues with Richard III and Hamlet heading out on the quest to find Shakespeare. They are now joined by Iago, who is as crafty in this tale as he is in Othello. There are several confrontations and a building tension between Richard and the unseen army of Macbeth.

There is a scene where Richard “plucks out the eyes” of Hastings that is reminiscent of the great scene in King Lear. The images are extremely graphic and not for the young or squeamish. I will never forget the first time I read King Lear in college and we discussed the “plucking of the eyes” scene. My professor said that she thought it was one of the most horrific scenes written for the stage. I personally find some of the scenes in Titus Andronicus to be more disturbing, but this is right up there.

Finally, there is a great quote spoken by Richard in response to Hamlet’s query regarding Richard’s deformity. Richard replies: “And for my own people to have a ruler who is flawed? It lets them take comfort in their own weaknesses.” This made me think about the state of politics in the US. There are many people who view educated leaders as “elitist” and not to be trusted, while showing support for those politicians who appear less smart because they are viewed as “regular guys.” It is like people want an uneducated leader because it gives them the idea that anyone can become a leader in this country. Rather than having leaders who embody the ideal for which we should strive, we are seeking to being our leaders down to our level.