Sexual Symbolism in “The Blossom” by William Blake 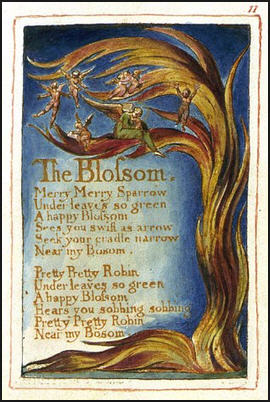 I am including the poem here, since it is short.

Merry, merry sparrow!
Under leaves so green
A happy blossom
Sees you, swift as arrow,
Seek your cradle narrow,
Near my bosom.

Upon first reading, I got the sense of sexual symbolism here. I asked myself if I was maybe reading too much into the poem, but after reading it over a couple more times, the imagery became stronger and I definitely concluded that Blake was expressing sexuality, particularly the loss of virginity.

The blossom is a symbol of female genitalia. Nothing really new here. The flower has been an artistic representation for the vagina for as long as humans have created art. What did strike me, though, is that preceding each mention of the blossom, Blake writes “Under leaves so green.” At first glance, I thought he was saying that the birds were under the leaves, but not so. I believe that he is implying that the blossom is under the leaves go green, which leads me to see this more as symbolic of Eve’s first sexual experience in the Garden of Eden, where she covered her genitalia with a leaf after becoming sexually aware.

In the first stanza, the image of the sparrow and its comparison to an arrow seeking the “cradle narrow” represents the phallus entering the woman for the first time. Again, there is nothing remarkable here. The arrow is a fairly common phallic symbol.

Now for me, it’s the second stanza that gets interesting. We have a different bird here, the robin, and the bird is associated with sobbing. I thought about the robin and pictured the bird with the reddish patch on its belly. I concluded that the robin must symbolize either the blood that accompanies the loss of virginity (being deflowered) or menstruation. If the robin represents loss of virginity, then the sobbing is a result of being deflowered. If the robin represents menstruation, then the sobbing likely represents the sorrow of the woman realizing that she did not get pregnant. It’s also possible that Blake was expressing both.

As with so many of the poems in Songs of Innocence, this one appears simple on the surface, but becomes more complex the deeper you look. As always, feel free to share your thoughts. Thanks for stopping by and reading.

9 responses to “Sexual Symbolism in “The Blossom” by William Blake”