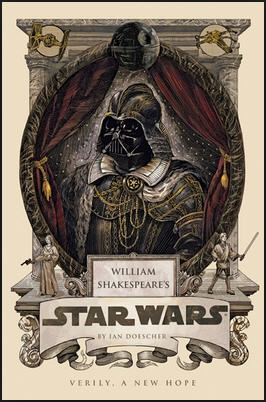 In a star-crossed galaxy far, far away…

I first heard about this book from the managing director of the Montford Park Players, a local Shakespeare troupe. Being a Star Wars geek and a Shakespeare nerd, I figured I had to read it. So I purchased a copy and bumped it to the top of the reading list.

Basically, the book is the telling of Star Wars as if written by William Shakespeare. Overall, I felt Ian Doescher did a pretty good job writing this. Let’s face it–it was a Herculean undertaking. To take the writing style of the greatest wordsmith the English language has known and attempt to apply that to what is arguably one of the most iconic films ever was ambitious, to say the least. Bearing that in mind, there were things that worked well for me and things that didn’t.

The thing that worked least for me, and I must confess actually became annoying by the end of the book, was the Chorus, which provides a commentary to fill in the action scenes that would otherwise be more challenging to pull off using dialog. I understand why Doescher chose to employ this technique, but honestly, I found it unnecessary. Anyone who picks up this book is going to be familiar with the Star Wars saga and will not need a Chorus to fill the gaps in the dialog. To make matters worse, it made the book read more like an ancient Greek drama rather than a Shakespearean play. Every time the Chorus chimed in, I felt like I was reading Aeschylus or Euripides.

Doescher gets it right on the structure of the book, though. He divides it into five acts, consistent with a Shakespeare play, and the breaks between the acts occur at logical points in the story. Additionally, the scenes work well too. I got the impression that he spent some time mapping out the structure and that effort definitely paid off.

There are parts of this book where the wordplay is great, particularly during some of the more iconic scenes. I literally laughed at loud at the image of Darth Vader speaking: “I find thy lack of faith disturbing” (p. 60). I also found Leia’s early confrontational words to Vader to be brilliant, and actually read that passage several times because I found it so amusing.

Darth Vader, only thou couldst be so bold.
When first my ship was under siege, I knew
‘Twas thee who had this peaceful vessel sack’d.
Th’ Imperi’l Senate shall not stand for this.
For when they hear thou hast attack’d a ship
On diplomatic mission–

Doescher also sneaks in a reference to Star Trek, which I thought was noble. I know there are purists on both sides who favor one over the other, but personally, I’ve always loved both Star Wars and Star Trek.

To march to the detention block’s unwise!
To make our way to danger folly ’tis!
To there present ourselves is passing mad!
To boldly go where none hath gone is wild!

I suspect that this book is the first of a trilogy, since the original Star Wars saga was a trilogy and it seems that half of the books published these days are parts of a series. And verily, the last lines of the book do imply that another installment will follow hot upon the heels.

There let our heroes rest free from attack,
Till darkness rise and Empire striketh back.