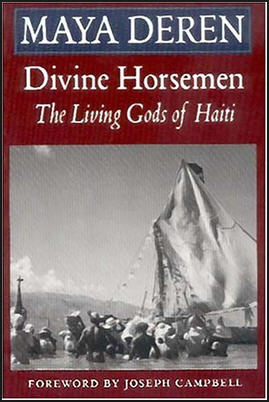 I finished reading this book last night. To sum it up, it is nothing short of amazing, one of the most powerful books I have ever read. Not only is it highly informative and inspirational, it is masterfully written. I strongly recommend this book to anyone interested in religion, spirituality, anthropology, sociology, or with even the slightest interest in human culture.

This post covers the second half of the book. I cover the first half in an earlier post.

The second half of the book focuses primarily on the voudou rites. It is emphasized that voudou rituals are religious and not magic rituals. The purpose of a religious ritual is very different from that of a magical ritual.

… religion differs sharply from magic, for the sorcerer’s apprentice has only to learn the proper words and their proper order to achieve the desired result. The magic ritual is made mysterious because the magician conceals his means from the eyes of the observer; the religious ritual seems mysterious because the observer cannot yet grasp the meaning of what he sees. In a sense, religious training develops the psychic perception and power of the individual; magic apprenticeship provides informations as to the means of manipulating the world. (p. 158)

One of the rites discussed is that of baptism. I found this fascinating, particularly because all I knew about baptism was Christian-based. In voudou, baptism is the process of making something divine, thereby creating an object that can be used to contact the divine spirits.

… baptism does not so much confer divinity upon an object per se as it makes the object a “door” by which divine energy may be drawn into this world by those who possess the key, which is the name to be called. (p. 186)

Voudou rituals are intended to serve the gods, not to attempt to bend the gods to serve the practitioners. For this reason, voudou practitioners are called serviteurs, since they are essentially offering themselves to the gods.

Divinity is an energy, an act. The serviteur does not say, “I believe.” He says: “I serve.” And it is the act of service — the ritual — which infuses both man and matter with divine power. (p. 187)

Two key components of a voudou ritual are drumming and dancing. These help alter the serviteurs’ consciousness, opening them up to the mystical experience. Deren states that drumming is “the organic axis of the spiritual cosmos, around which all temporal elements of ritual are centered.” (p. 238) Regarding the ritual dancing, she asserts that “such dance might be understood as a meditation of the body.” (p. 241)

The final chapter of the book focuses solely on possession. There is no way that I could do this chapter justice in a blog post. Suffice to say that it is riveting to read. Deren describes in breath-taking detail how it feels to become possessed, the physical and emotional changes that one experiences. It must be read to be appreciated. I will note, though, that she describes the loss of self associated with possession by a loa (divine being) as a feeling of death, since one’s spirit is displaced by the loa.

I cannot emphasize enough how powerful this book is. Just looking over my notes as I write this post fills me with awe. Now, as an added bonus and to whet your appetite to purchase and read this book, I am including the film that Deren made documenting her observations. It’s worth taking the 50 minutes to watch. The footage of the rituals, including possessions, is amazing. Enjoy, and thanks for reading.

3 responses to ““Divine Horsemen: The Living Gods of Haiti” by Maya Deren – Pt 2”