“Alice Cooper: The Last Temptation – Book I” by Neil Gaiman 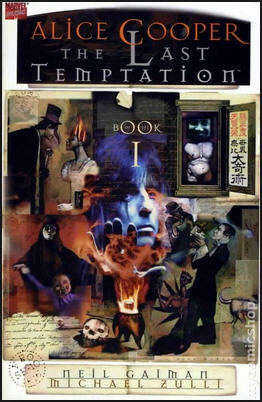 I confess that I am a huge fan of Alice Cooper. I’ve seen him perform more times than I can recall and his music has always been the soundtrack to my Halloweens since I was a lad. So when I discovered that Neil Gaiman wrote a three-installment comic featuring Alice Cooper, I immediately put in a request at my local comic store to find copies. The other day, they called to let me know that they had found the first issue for me which includes a sealed cassette tape of The Last Temptation album (which I already own on CD). I picked it up and this morning finally got around to reading it.

The comic is everything I love about Gaiman. It is dark, mysterious, and blends the boundaries between fantasy and reality. Young Steven is tempted by Alice, who poses as a sideshow proprietor, to attend the Theatre of the Real, where scenes are performed that show the bleak visions of reality which face the young man when he gets older. Alice beckons Steven to forego his future and to remain in the theater for the rest of his life, where he will be safe from the horrors of the real world. The theatre becomes the escape from reality, a world of art and fantasy where one no longer has to face what is real.

Ultimately, Steven rejects the temptation, but the proprietor promises that there is another act which he must attend. As Steven exits the theatre, the stage is being set for the next act, in which temptation will presumably play out on stage before him.

The artwork in this comic is stunning. It is a rich combination of vibrant color and darkness, which works perfectly with the story. The images add a surreal effect to the pages that draws you in, tempting you to lose yourself in the scenes that play out on the pages.

As I am writing this, my mind is working feverishly to figure out how to find the next issue. As much as I would rather wait to see if my local store can find the next two for me, I think I may have to shop online. I am far too curious to find out how this play unfolds. Hopefully, another post will follow soon.

3 responses to ““Alice Cooper: The Last Temptation – Book I” by Neil Gaiman”