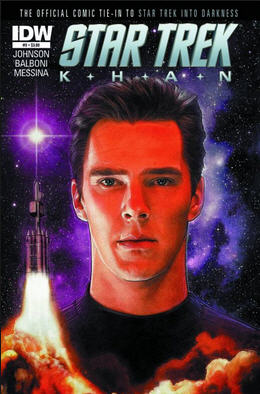 In this third installment of the series, the story really begins to flesh out. It’s been great so far, but now the story is getting even more interesting.

Khan describes how he ruled on Earth. He was a benevolent ruler and was able to secure the loyalty of his subjects by providing them what they lacked: education, food, healthcare, and so forth. In contrast, the other genetically enhanced leaders fought amongst themselves and abused their subjects, resulting in war and devastation.

Khan asserts that humans actually prefer to be ruled, to feel that they are cared for.

To understand the extent of my power, is to understand a simple, fundamental fact about human beings. They long to be ruled. They long for order, for security, for a voice from above to tell them how things will be. They longed for my voice. In the years after I rose to power, I used my superior intellect to revolutionize society. Together with my brothers and sisters, I eliminated poverty and sickness within my borders. The concept of need was as archaic as rubbing two sticks together.

There is some truth in this passage. A society in which people are content is a society that is peaceful and prosperous. Problems tend to arise when people feel abused, neglected, and disregarded. I feel that our leaders could learn something from this. Instead of making decisions based upon self-serving ideals, leaders who genuinely put the needs of the people first and foremost would enjoy wider support.

In the end, the oppressed humans discover a biological weapon that could be used against the genetically enhanced persons. In order to save himself and his companions, Khan boards a spacecraft, the infamous Botany Bay, and escapes to the stars, seeking a new world that he can colonize.

If I had to rate this, I’d give it a solid 4 ½ out of 5 stars. The story and the artwork are both great, and I found it thought-provoking as well as enjoyable to read.  Look for my review of Issue #4 soon.