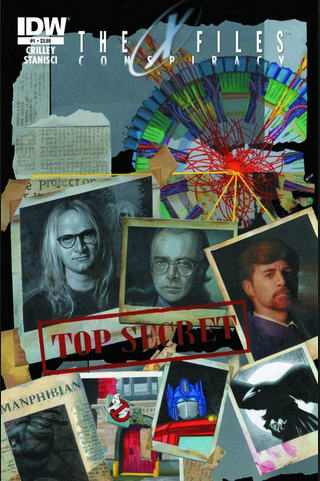 This is the first issue in a six-part miniseries. The premise is that researchers at CERN, after isolating the Higgs Boson, discovered a new particle: the Higgs Singlet. According to the comic, the Higgs Singlet “is reputedly able to travel into a fifth dimension, cutting through time like a scalpel through flesh.” I did a quick Google search and discovered that the particle exists. There are several articles regarding the Higgs Singlet on physics sites, if you are inclined to learn more about this. Anyway, the story continues with the Lone Gunmen receiving encrypted files from a CERN scientist. As they begin decrypting the files, they discover that the files are articles concerning a pandemic which appears to be caused by a man-made virus. The Gunmen share the information with Mulder and Scully as the first outbreak occurs.

While the Lone Gunmen have always my least favorite thing about the X-Files, I have to confess that this story interests me. I am fascinated by physics, especially as it relates to matters that have often been solely in the realm of the spiritual. A great book in this area is The Holographic Universe. If you are interested in the marriage of science and mysticism, I highly recommend this book. And while I do not consider myself to be a conspiracy freak, I think it would be foolish to dismiss the possibility that a corporation or government might not be actively exploring the genetic manipulation of viruses to be used as biological weapons.

I don’t want to give away too much of the story; just enough to whet the appetite. The artwork is OK, but not spectacular. The writing and storyline certainly makes up for it, though. The good thing is, if you are an X-Fan or merely a conspiracy buff, you can follow this comic without a major commitment. Hey, it’s only six issues, right? If you decide to read them, feel free to share your thoughts. Cheers, and happy reading!

2 responses to “The X-Files Conspiracy: Issue #1”