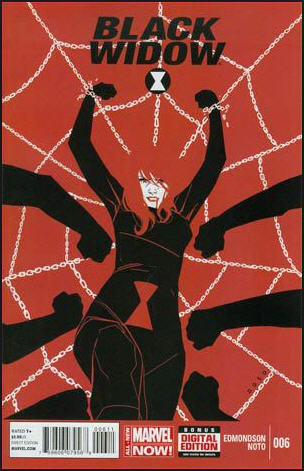 In issue #5, Natasha is captured by Damon Dran. In this issue, she escapes and captures Dran, handing him over to S.H.I.E.L.D. While in S.H.I.E.L.D. custody, Dran is assassinated by a Chaos operative. As he is carrying out the assassination, the operative says “Chaos rains, Mr. Dran.” I found this to be a clever double-entendre, implying that chaos reigns. I personally ascribe to the theory that order is constantly striving to move toward the chaotic state. Because it requires so much energy to maintain order, it just seems logical based upon the idea of entropy that order would tend toward disorder. Anyway, let me back away from that rabbit hole.

The theme of this issue, and the subtitle, is “Paranoia.” Throughout the issue, the idea of how paranoia affects covert operatives is explored. Natasha accurately acknowledges that the state of being alone fuels paranoid thoughts. This ultimately leads to the fear of trusting another person. Trust can be scary under ordinary circumstances, but in the clandestine world of spies it becomes dangerous, too.

But who can I trust? Because I don’t know if I can do this by myself… It takes so much effort to get close to someone. To navigate those finely woven threads of doubt and trust. But sometimes… sometimes you need someone else.

I’ve found that the ability to trust comes after one gains a sense of self-confidence. We need relationships with others in order to share what is going on inside. Isolation is not a healthy state of being.

Thanks for stopping by, and keep reading!

Comments Off on Black Widow: Issue #6