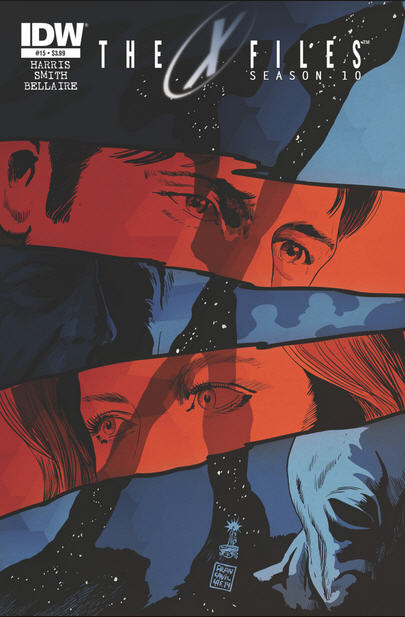 This issue concludes the five-part “Pilgrims” mini-series. It was a welcome installment after what I felt was a weak issue last month (click here for my review of issue 14). The writers were able to pull the storyline back together, answering some questions, and leaving some things unanswered, which is nothing more than what I would expect from the X-Files.

There is some interesting passing of consciousness and memories between incarnations of characters which I found quite interesting. This is somehow connected to alien abduction and some secret government experiments. Krychek and the smoking man both seem to have doppelgangers of sorts and parts of their memory is passed between these incarnations. I for one have always believed that while the flesh is temporary, it is consciousness which is eternal. I’m hoping this gets explored further in subsequent issues.

There was a nice touch at one point, where the smoking man is guiding Krychek in an attempt to spark his memory. Krychek remembers being taken to a secret facility where something was done to him, in a room marked 1013. Ten Thirteen is Chris Carter’s production company. It is named so for Chris Carter’s birthday, which is October 13. Friday, October 13, 1307 was also the date that the Knights Templar were arrested. Anyway, I thought that was a nice touch.

Next month begins a new chapter in the X-Files saga: “Immaculate Conceptions.” I look forward to it.

Comments Off on The X-Files Season 10 Comic: Issue #15