“To Horror” by Robert Southey 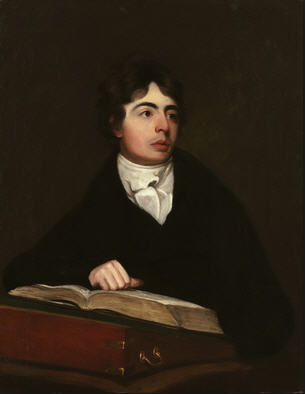 Dark HORROR, hear my call!
Stern Genius hear from thy retreat
On some old sepulchre’s moss-cankered seat,
Beneath the Abbey’s ivied wall
That trembles o’er its shade;
Where wrapt in midnight gloom, alone,
Thou lovest to lie and hear
The roar of waters near,
And listen to the deep dull groan
Of some perturbed sprite
Borne fitful on the heavy gales of night.

Or whether o’er some wide waste hill
Thou mark’st the traveller stray,
Bewilder’d on his lonely way,
When, loud and keen and chill,
The evening winds of winter blow
Drifting deep the dismal snow.

Or if thou followest now on Greenland’s shore,
With all thy terrors, on the lonely way
Of some wrecked mariner, when to the roar
Of herded bears the floating ice-hills round
Pour their deep echoing sound,
And by the dim drear Boreal light
Givest half his dangers to the wretches sight.

Or if thy fury form,
When o’er the midnight deep
The dark-wing’d tempests sweep
Watches from some high cliff the encreasing storm,
Listening with strange delight
As the black billows to the thunder rave
When by the lightnings light
Thou seest the tall ship sink beneath the wave.

Dark HORROR! bear me where the field of fight
Scatters contagion on the tainted gale,
When to the Moon’s faint beam,
On many a carcase shine the dews of night
And a dead silence stills the vale
Save when at times is heard the glutted Raven’s scream.

Where some wreck’d army from the Conquerors might
Speed their disastrous flight,
With thee fierce Genius! let me trace their way,
And hear at times the deep heart-groan
Of some poor sufferer left to die alone,
His sore wounds smarting with the winds of night;
And we will pause, where, on the wild,
The Mother to her frozen breast,
On the heap’d snows reclining clasps her child
And with him sleeps, chill’d to eternal rest!

Black HORROR! speed we to the bed of Death,
Where he whose murderous power afar
Blasts with the myriad plagues of war,
Struggles with his last breath,
Then to his wildly-starting eyes
The phantoms of the murder’d rise,
Then on his frenzied ear
Their groans for vengeance and the Demon’s yell
In one heart-maddening chorus swell.

Cold on his brow convulsing stands the dew,
And night eternal darkens on his view.

HORROR! I call thee yet once more!
Bear me to that accursed shore
Where round the stake the impaled Negro writhes.

Assume thy sacred terrors then! Dispense
The blasting gales of Pestilence!
Arouse the race of Afric! holy Power,
Lead them to vengeance! and in that dread hour
When Ruin rages wide
I will behold and smile by MERCY’S side.

Although I love the English Romantic Writers, I confess that I had not read any of Southey’s works before. This poem works well for me though and captures what I find fascinating about the horror genre.

In this poem, HORROR is a dark muse that inspires the writer. HORROR is the source of powerful yet dark emotions and thoughts. Southey describes the various manifestations of HORROR in the physical world. As he meditates on these horrors, he is able to move into the darker nether regions of his psyche and draw poetic inspiration.

What I found the most intriguing about this piece is the way it works as an incantation. Southey is summoning the dark muse, seeking to manifest HORROR before him. He summons HORROR three times, drawing on the mystical power of the number three to bring something into being. For each of these calls, he includes a descriptor: Dark HORROR, Dark HORROR, and Black HORROR. Then Southey does something interesting; he summons HORROR a fourth time.

HORROR! I call thee yet once more!
Bear me to that accursed shore
Where round the stake the impaled Negro writhes.

This kind of puzzled me a bit. Why would he call on the dark muse a fourth time if it has already manifested? My conclusion is that, once HORROR was evoked, the fourth call was to invite HORROR inside his consciousness, to rend his sanity and unlock the hidden realms of his psyche. Once this occurs, he is able to draw artistic inspiration from the darker aspects of his subconscious and express the shadowy beauty that lurks within.

2 responses to ““To Horror” by Robert Southey”