This issue details the battle between the super-villains and the Red Onslaught. It basically moves the general story along, and as with all the installments in the series, it is richly illustrated and the writing is good. There is one panel that stands out for me, though. Magneto is remembering a discussion he had with Charles Xavier regarding mankind’s prospect of peaceful coexistence.

Charles: Don’t you think… can’t you imagine… that mankind has learned from past mistakes? Peaceful coexistence is more than just a dream.

Magneto: It’s madness, Charles. And it saddens me to think of the day such a realization will crush you. 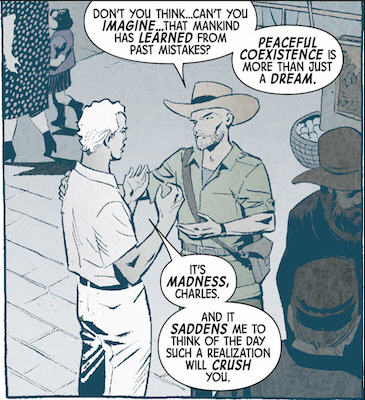 This is something that has been on my mind lately. As I watch the news footage of the unrest in Ferguson, MO and the continued fighting and hatred in the Middle East, I cannot help but wonder if humans will ever learn to exist together peacefully. Are we capable as a species to learn and evolve, or is there some instinct that is hard-coded in our DNA that triggers the tendency toward anger, fear, envy, and resentment, the core issues at the heart of humanity’s intolerance toward others?

While my views on humanity are stained with cynicism, I am still a romantic and an idealist at my core. So yes, I feel that someday, although not likely in my lifetime, humans will evolve to an enlightened state where peaceful coexistence will become a reality. Unfortunately, I see a lot of death and destruction before that Phoenix can rise and become a reality.