“Dust of Snow” by Robert Frost 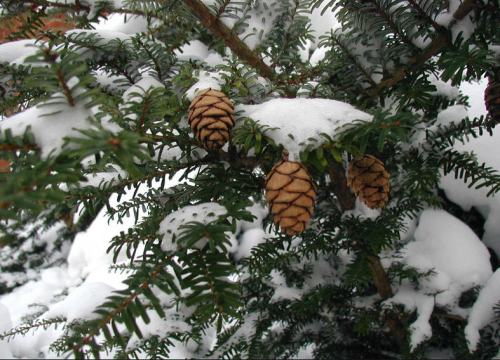 Has given my heart
A change of mood
And saved some part
Of a day I had rued.

Although this is a short, it is very powerful.

The crow as a symbol represents death. This is heightened by the fact that the crow is in a hemlock tree, which also represents death. The reference to snow means the poem is set in winter, which is also symbolic of death. So in the first stanza, we have a triple death image that sets a dark and somber mood. But this changes in the second stanza.

Frost clearly states that his heart has “A change of mood.” I think that he is describing a scene at a cemetery where a hemlock is growing. It is likely he is actually attending a funeral, but there is no definitive evidence of that. What is clear, though, is that the crow knocking the snow from the hemlock branches has given him hope. My guess is that it is because hemlock is an evergreen tree and stays green throughout the winter. This would symbolize that life continues after death. So the hemlock tree becomes a symbol of death as well as a symbol of rebirth and regeneration. This alleviates the sadness he feels at the loss of his loved one.

4 responses to ““Dust of Snow” by Robert Frost”