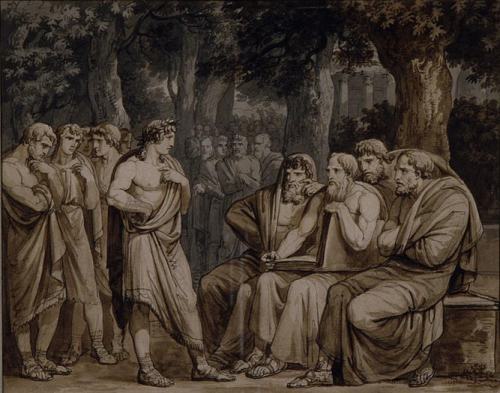 In this book, Telemachus attends the assembly, representing his father. He entreats the suitors to abandon his family’s estate, but they mock him. Afterwards, he enlists the aid of Athena to assist him in securing a ship to sail to Pylos and Sparta. When all is prepared, he sneaks away in the night and only the old nurse Eurykleia is made aware of his departure.

There are two passages in this section that stood out for me. The first one takes place during Telemachus’ response to Antinoos during the assembly.

But if your hearts are capable of shame,
leave my great hall, and take your dinner elsewhere,
consume your own stores. Turn and turn about,
use one another’s houses. If you choose
to slaughter one man’s livestock and pay nothing,
this is rapine; and by the eternal gods
I beg Zeus you shall get what you deserve:
a slaughter here, and nothing paid for it!

What I found interesting about this passage is that the act of being ungracious and abusing a host is seen as a horrific act worthy of death. One gets the impression that the suitors are raping the household, that there is violent violation in their actions. And I personally see an environmental message here. We as a species are but guests and visitors on this earth. As such, we should be respectful of what the earth has to offer. To use and consume all that the earth has to offer without regard is equivalent to what the suitors are doing in Odysseus’ home.

The next section I want to explore takes place when Mentor is addressing the assembly.

“Hear me, Ithakans! Hear what I have to say.
Let no man holding scepter as a king
be thoughtful, mild, kindly, or virtuous;
let him be cruel, and practice evil ways;
it is so clear that no one here remembers
how like a gentle father Odysseus ruled you.
I find it less revolting that the suitors
carry their malice into violent acts;
at least they stake their lives
when they go pillaging the house of Odysseus—
their lives upon it, he will not come again.
What sickens me is to see the whole community
sitting still, and never a voice or a hand raised
against them—a mere handful compared with you.”

This may have been my favorite passage in this book. Mentor condemns, not the suitors, but those citizens who stand by in complacency and do nothing while these atrocities occur. I was reminded of the holocaust. The citizens of Ithaca who refuse to condemn the actions of the suitors are no different than the people who stood by and silently watched as millions of Jews were massacred. Who is worse—the Nazi soldier who is carrying out his orders, or the person who stands by silently and refuses to do anything? It is a challenging question and one that is worth contemplating. Would you stand by if you saw someone being abused, or would you speak out? It is something we should all ask ourselves.

If you are reading along, I would love to hear your thoughts on these or other passages in this book. Please feel free to comment below. Thanks for stopping by and taking the time to read my thoughts. Cheers!