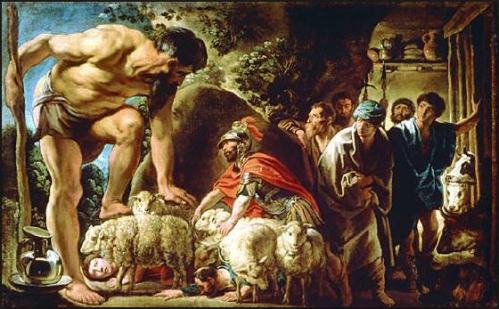 In this book, Odysseus begins telling the tale of his journey to the Phaeacians. He first tells them of his encounter with the Lotus-eaters. The lotus fruit is an intoxicant and as soon as Odysseus’ crew eats it, they lose touch with reality and only want to continue eating the fruit. After escaping from the island of the Lotus-eaters, Odysseus and his men are captured by the Cyclops Polyphemus who starts eating the men. Odysseus eventually blinds the Cyclops and escapes through trickery, causing Polyphemus to pray to his father, Poseidon, for revenge upon Odysseus.

For this post, I want to focus on the Polyphemus section. When Odysseus first encounters the Cyclops, Odysseus entreats him to show them hospitality in the name of the gods. Polyphemus’ response demonstrates a disdain for the gods, which I found interesting.

You are a ninny,
or else you come from the other end of nowhere,
telling me, mind the gods! We Kyklopes
care not a whistle for your thundering Zeus
or all the gods in bliss; we have more force by far.
I would not let you go for fear of Zeus—
you or your friends—unless I had a whim to.
Tell me, where was it, now, you left your ship—
around the point, or down the shore, I wonder?

I consider the Cyclops to be a symbol of a myopic person, someone who can only see one side of something, usually their own. So here the Cyclops has a singular, self-centered view. He is blind to his connection with the Divine and does not see or care about how others are also connected with the Divine. He cares only about himself and satisfying his basic urges and desires. What I found ironic, though, is that after Polyphemus is blinded, then he calls upon Poseidon, his father. I find two interpretations of this. From a cynical perspective, we have the self-centered person who disregards his spiritual connection with god praying and suddenly becoming “religious” when things go awry. We have all known people like this, who claim to not care about the Divine but immediately begin to pray when faced with adversity. But I also see a more spiritual interpretation. Once Polyphemus is blinded, he no longer sees the physical world. Instead, his vision is turned within and he recognizes his connection to the world of the Divine.

I mentioned before that one of the archetypes that Odysseus represents is the Trickster. In this part of the tale, he establishes himself as the Trickster. He begins his ruse by telling Polyphemus that his name is “Nobody.”

Kyklops,
you ask my honorable name? Remember
the gift you promised me, and I shall tell you.
My name is Nohbdy: mother, father, and friends,
everyone calls me Nohbdy.

After Odysseus and his men drive the stake into the Cyclops’ eye, Polyphemus calls out to the other Cyclopes for help.

‘What ails you,
Polyphemos? Why do you cry so sore
in the starry night? You will not let us sleep.
Sure no man’s driving off your flock? No man
has tricked you, ruined you?’

Out of the cave
the mammoth Polyphemos roared in answer:

To this rough shout they made a sage reply:

‘Ah well, if nobody has played you foul
there in your lonely bed, we are no use in pain
given by great Zeus. Let it be your father,
Poseidon Lord, to whom you pray.’

Odysseus responds to the events as the Trickster would, showing delight in his craft and deception.

So saying
they trailed away. And I was filled with laughter
to see how like a charm the name deceived them.

As Odysseus and his men escape from Polyphemus, Odysseus begins to take on characteristics of the hero archetype. A hero has a flaw, which ultimately leads to the hero’s fall. Frequently, hubris is the flaw which heroes exhibit, and this is the case with Odysseus. He acts out of hubris and this ultimately allows Polyphemus to summon Poseidon’s wrath upon Odysseus.

I would not heed them in my glorying spirit,
but let my anger flare and yelled:

‘Kyklops,
if ever mortal man inquire
how you were put to shame and blinded, tell him
Odysseus, raider of cities, took your eye:
Laertes’ son, whose home’s on Ithaka!’

This is a great book in the epic and truly demonstrates the complexity of Odysseus as a character. I hope you found my thoughts interesting and be sure to check back for my thoughts on Book X soon.