“Odyssey” by Homer: Book XIV – Hospitality in the Forest 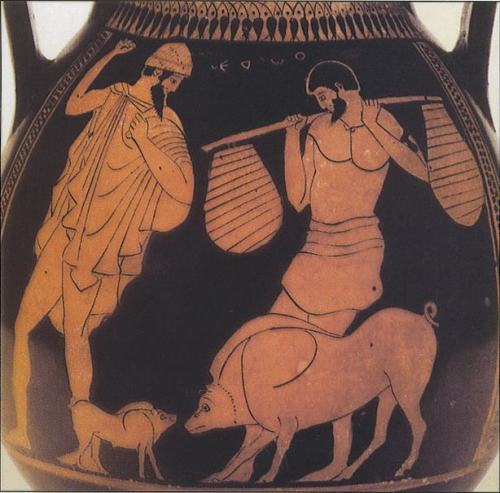 In this episode, Odysseus is given shelter in the hut of Eumaeus, his swineherd. Since Odysseus is disguised, Eumaeus does not recognize him, but invites him in as courtesy to a wanderer and offers Odysseus food and drink. Odysseus lies about where he is from and assures Eumaeus that his master is still alive and will return soon.

This book presents Odysseus more as the archetype of the wanderer, although, he still demonstrates a bit of the trickster through his lies and stories.

Come to the cabin. You’re a wanderer too.
You must eat something, drink some wine, and tell me
where you are from and the hard times you’ve seen.

After the meal, Odysseus and the swineherd begin talking. Eumaeus expresses his belief that all wanderers are also liars.

Wandering men tell lies for a night’s lodging,
for fresh clothing; truth really doesn’t interest them.
Every time a traveller comes ashore
he has to tell my mistress his pretty tale,

The connection between the wanderer and the trickster archetypes is established. Odysseus embodies both, but I wonder if the implication here is that both archetypes are intrinsically connected. It is almost as if they are two aspects of the same. The trickster, who revels in deceit and trickery, must of necessity travel constantly in search of new dupes. Likewise, the constant wanderer must always be ready to use his wit and guile in order to secure what is needed and manipulate individuals into providing shelter and provisions.

One of my favorite quotes from this episode is when the swineherd confronts Odysseus and asks him why he is a liar.

That tale
about Odysseus, though, you might have spared me;
you will not make me believe that.
Why must you lie, being the man you are,
and all for nothing?

Since Odysseus is an incarnation of the trickster, he cannot help but lie. It is part of his nature. Even though he will not gain anything—the swineherd has already given him food and shelter—Odysseus as the trickster must still lie and make up stories, for no reason but because he can.

2 responses to ““Odyssey” by Homer: Book XIV – Hospitality in the Forest”