This issue concludes the arc, and I have to say, it’s excellent. The artwork is creepy, the writing is top-notch, and there are some great twists as the story ties together nicely.

The issue begins with an image that seems oddly out of place, with the caption reading “This is not an ending.” 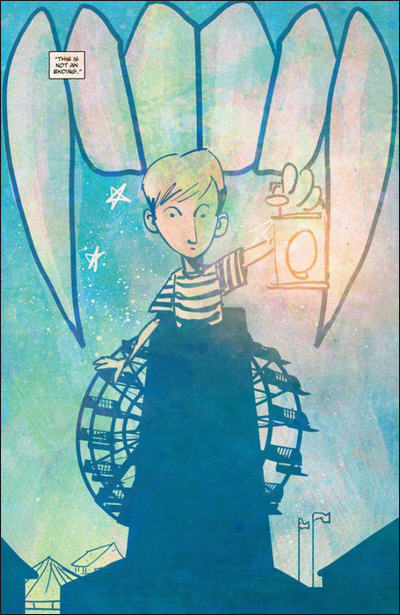 It is later revealed that this is a poster from one of Charlie’s books and part of a flashback. I’ll say no more so as not to spoil the story. Suffice to say that it has a symbolic meaning in the overall storyline.

Charlie and his daughter Sailor manage to escape from the realm of the wytches, which is an underworld entered through a hole in a tree. There is strong symbolism with this imagery. In shamanism, practitioners would enter other realms by projecting their spirit bodies (or subconscious) through a portal, which could be a hole in the earth, a hole in a tree, a pool of water, or such. Charlie and Sailor are in a terrifying realm deep in the subconscious and are struggling with their internal demons as they attempt to crawl back to the surface (ordinary reality). The associated images are torn from the darkest and scariest parts of the psyche. 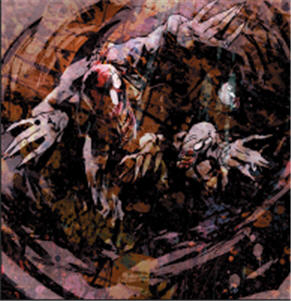 To sum up, this is a graphic novel that addresses the psychological effects of fear, remorse, and selfishness. As a parent, there are aspects of this series that are particularly disturbing, especially regarding the twist in this installment (again, I’m not going to spoil it for you). I will say that this is one of the best pieces of psychological horror that I have read in a long time and it is definitely worth reading. One final note: there is some fine bonus material at the end of this issue, including original ink sketches and unused promo art. There is also a “pledge” that the graphic novel will continue with a new arc that “will focus on Sailor, and the Irons, but at its core it will be about issues as personal as this arc has been.” And here’s my pledge—when the next arc comes out, I will read it and let you know my thoughts. Thanks for stopping by and have a great day!!