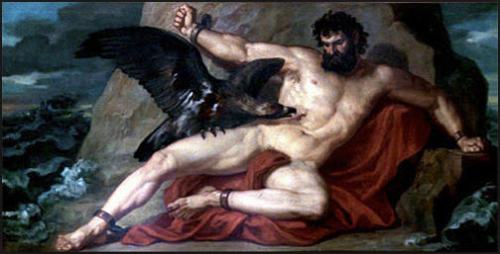 The play begins with a soliloquy in which Prometheus, bound to the rock, speaks out against God as the oppressor of humanity.

Monarch of Gods and Dæmons, and all Spirits
But One, who throng those bright and rolling worlds
Which Thou and I alone of living things
Behold with sleepless eyes! regard this Earth
Made multitudinous with thy slaves, whom thou
Requitest for knee-worship, prayer, and praise,
And toil, and hecatombs of broken hearts,
With fear and self-contempt and barren hope.
Whilst me, who am thy foe, eyeless in hate,
Hast thou made reign and triumph, to thy scorn,
O’er mine own misery and thy vain revenge.
Three thousand years of sleep-unsheltered hours,
And moments aye divided by keen pangs
Till they seemed years, torture and solitude,
Scorn and despair, — these are mine empire: —
More glorious far than that which thou surveyest
From thine unenvied throne, O Mighty God!
Almighty, had I deigned to share the shame
Of thine ill tyranny, and hung not here
Nailed to this wall of eagle-baffling mountain,
Black, wintry, dead, unmeasured; without herb,
Insect, or beast, or shape or sound of life.
Ah me! alas, pain, pain ever, for ever!

Prometheus is immediately established as the archetype of rebellion, defiant and opposing the force of tyranny which is represented by God. What I find most interesting about this passage is how Prometheus compares and contrasts with Christ. Both figures are bound: Christ to the cross and Prometheus to the rock. The difference is in how each figure reacts. Christ, while questioning God’s motivation, is accepting of his fate. This is not the case with Prometheus. Prometheus, like Satan, refuses to accept God’s will. He is filled with self-righteous indignation and believes that he is justified in his actions.

The next part of this soliloquy which is worth pointing out is Prometheus’ description of his imprisonment and torture.

The crawling glaciers pierce me with the spears
Of their moon-freezing crystals, the bright chains
Eat with their burning cold into my bones.
Heaven’s wingèd hound, polluting from thy lips
His beak in poison not his own, tears up [1.35]
My heart; and shapeless sights come wandering by,
The ghastly people of the realm of dream,
Mocking me: and the Earthquake-fiends are charged
To wrench the rivets from my quivering wounds
When the rocks split and close again behind: [1.40]
While from their loud abysses howling throng
The genii of the storm, urging the rage
Of whirlwind, and afflict me with keen hail.

Here we have images of captivity connected with ice. I see the ice as representing a several things. First, it symbolizes the cold, harsh judgment of God. Secondly, it symbolizes memory, clear, yet hard and painful. The coldness of the ice burns, implying that memory as well as God’s judgment both cause internal pain and turmoil. Finally, the imagery connects the text to Dante. In The Inferno, the 9th circle of Hell is the area in which sinners are imprisoned within an icy lake. It is worth noting that Judas is trapped in the 9th ring.

Toward the end of his soliloquy, Prometheus, ever defiant, emphasizes that his wisdom stems from his rejection of God and the suffering which he endured as a result.

How will thy soul, cloven to its depth with terror,
Gape like a hell within! I speak in grief,
Not exultation, for I hate no more,
As then ere misery made me wise.

This for me embodies the romantic ideal. Emotion is what makes us human and divine. And pain and suffering are powerful emotions which are often fuel for creative and artistic expression. Hence, Prometheus serves as a symbol for humanity’s creative and artistic spirit, which is often contradictory to the tyrannical forces of social mores which seek to instill conformity and compliance.

Thanks for stopping by, and I will post more on this great dramatic work soon.