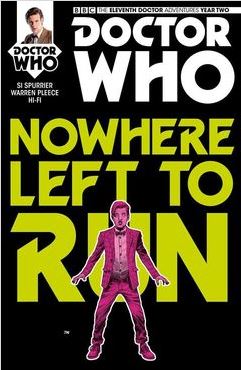 While I’ve been following this arc since the beginning, I have not written about any installments in a while. That’s because, while entertaining, there hasn’t been anything that has jumped out at me as being worth expounding on. But this issue addresses a topic that interests me, which is fanaticism.

The problem, you see, is that mindless devotion to a cause is… well… it’s actually repulsively common. Sontarans… Cybermen… Daleks. The loss of the self, faceless efficiency, blah blah blah. Rank and file, back-and-forth, endless attrition. Potato people. That’s how wars are fought. But they’re won by madmen. Those happy to do the unthinkable in pursuit of victory—even if it means their own death.

As I read this, I could not help but think of fanatics in bellicose situations. Whether these individuals are labeled as heroes or terrorists really depends on which side of the conflict you are on. But the sad fact is the same—some people are so driven by the cause they believe in that they are willing to give their life or take the lives of others for an idea or a cause.

I’ve wondered, on occasion, whether there was a cause that I would be willing to sacrifice my life for. It’s a difficult question to answer honestly. I would like to say that for the greater good of humanity, I would sacrifice myself. But would I? I really can’t answer that, because I don’t know. Right now, there is no ideology that I feel so strongly about.