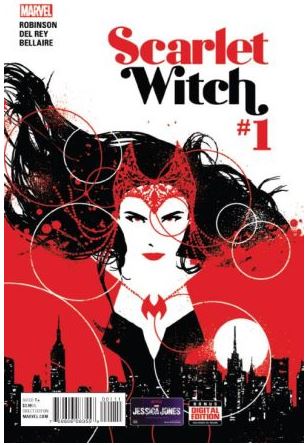 I was recently talking on the phone with my friend Miriam who is a comic connoisseur extraordinaire. While we were discussing various graphic novels, she suggested that I read Scarlet Witch, that it was right up my alley. I had a little bit of a challenge finding the first issue, but persistence paid off. And she was correct—this tale is right up my alley.

The writing and artwork that comprise this tale are outstanding, and the story draws you right in. The Scarlet Witch, whose name is Wanda Maximoff, is a pagan living in New York City who uses her mystical powers to assist police and fight evil. While this sounds like a hackneyed premise, the quality of the writing and the art makes this worth reading. In addition, there are also some intriguing mystical concepts woven in that piqued my interest, such as the following.

“You and I both know there’s no such thing as bad dreams. They’re messages our subconscious sends us, if we only cared to read them as such.”

I have the next three issues queued up and ready to be read. Expect my thoughts on those shortly.