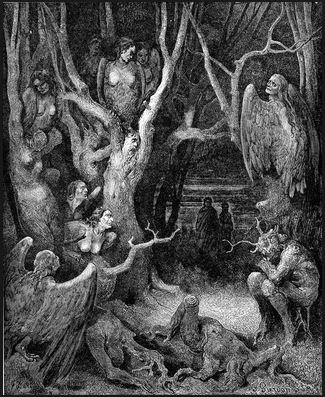 Evening was in the wood, louring with storm.
A time of drought had sucked the weedy pool
And baked the channels; birds had done with song.
Thirst was a dream of fountains in the moon,
Or willow-music blown across the water
Leisurely sliding on by weir and mill.

Uneasy was the man who wandered, brooding,
His face a little whiter than the dusk.
A drone of sultry wings flicker’d in his head.
The end of sunset burning thro’ the boughs
Died in a smear of red; exhausted hours
Cumber’d, and ugly sorrows hemmed him in.

He thought: ‘Somewhere there’s thunder,’ as he strove
To shake off dread; he dared not look behind him,
But stood, the sweat of horror on his face.

He blunder’d down a path, trampling on thistles,
In sudden race to leave the ghostly trees.
And: ‘Soon I’ll be in open fields,’ he thought,
And half remembered starlight on the meadows,
Scent of mown grass and voices of tired men,
Fading along the field-paths; home and sleep
And cool-swept upland spaces, whispering leaves,
And far off the long churring night-jar’s note.

But something in the wood, trying to daunt him,
Led him confused in circles through the thicket.
He was forgetting his old wretched folly,
And freedom was his need; his throat was choking.
Barbed brambles gripped and clawed him round his legs,
And he floundered over snags and hidden stumps.
Mumbling: ‘I will get out! I must get out!’
Butting and thrusting up the baffling gloom,
Pausing to listen in a space ’twixt thorns,
He peers around with peering, frantic eyes.

An evil creature in the twilight looping,
Flapped blindly in his face. Beating it off,
He screeched in terror, and straightway something clambered
Heavily from an oak, and dropped, bent double,
To shamble at him zigzag, squat and bestial.

Headlong he charges down the wood, and falls
With roaring brain—agony—the snap’t spark—
And blots of green and purple in his eyes.
Then the slow fingers groping on his neck,
And at his heart the strangling clasp of death.

I wanted to find a good “horror” poem that was not written by Edgar Allan Poe, so I did a web search and found this one. I was totally unfamiliar with Sassoon, so I did not have any expectations. I have to say, I really found this poem powerful, haunting, and well-written.

I see this as symbolic of someone who is haunted by memories of his past, most likely something deeply traumatic. He has kept his pain locked inside, and this pain is represented by the forest in which he wanders. He keeps thinking that he will eventually find a clearing, a place of reprieve from his inner torment, which is symbolized by the “open fields” and “meadows.” But it never happens. The vines and brambles of his memory snag him and hold him in the past. Demons that haunt his psyche swoop down on him. Eventually, he dies, carrying with him the burden of his suffering.

While this is certainly a grim poem, it should be looked at as a warning. We all carry guilt, pain, and suffering. But what is important is that we do not keep that pain hidden inside us. When we do, it grows and morphs into nightmares which haunt us psychologically, and the longer we keep those secrets hidden inside us, the sicker we become, until they ultimately consume us.

10 responses to ““Haunted” by Siegfried Sassoon”