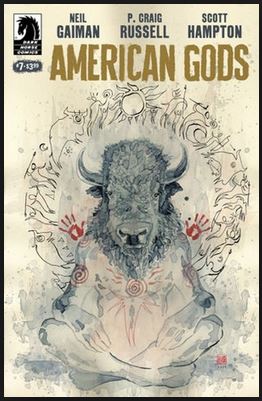 This graphic series continues to impress me. A lot happens in this installment, and I could certainly write extensively about it, but will focus on the two aspects which stood out most prominently for me.

While Shadow is driving, he picks up a young woman named Sam who is hitchhiking. As they are driving, they get into an interesting discussion regarding Herodotus.

Shadow: It’s like he’s writing these histories, and they’re pretty good histories. Loads of weird little details. And then there are the stories with gods in them. Some guy is running back to report on the outcome of a battle and he’s running and running, and he sees Pan in a glade… and Pan says… “Tell them to build me a temple here.” So he says… “Okay.” … and runs the rest of the way back. And he reports the battle news, and then he says… “Oh, and by the way, Pan wants you to build him temple.” It’s really matter-of-fact, you know?

Sam: I read some book about brains, how five thousand years ago, the lobes of the brain fused, and before that people thought when the right lobe of the brain said anything, it was the voice of God. It’s just brains.

Shadow: That back then people used to run into the gods from time to time.

I had read Herodotus back in college and remembering liking his histories. Probably something I should read again at some point. But what struck me the most about this section is how, in the past, people did have more interaction with their gods than they do today. I think it is because we have become more distracted by the trappings of our manufactured societies. We have replaced our old gods with new gods, gods of science, technology, commerce, and so forth. Which segues nicely into the next section I want to share.

In this scene, Shadow is watching television in a motel room, and a goddess manifests as Lucille Ball on the TV. She intimates to him that she is one of the new gods, who are the future.

As I pondered this, I recalled sadly when my wife and I recently went to Cherokee. We went into some of the “Native American” gift shops, and they were all filled with manufactured garbage from China that was supposed to capture the power of what was once a mighty spiritual system. It was depressing. I could not find a single item that was actually made by a Native American craftsperson. I ended up buying only some locally roasted coffee.

Comments Off on “American Gods” by Neil Gaiman: Issue 07