Thoughts on “The Sandman, Volume 4: Season of Mists” by Neil Gaiman 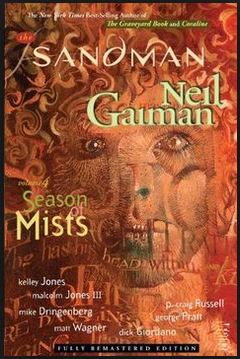 My friend Miriam told me this was her favorite book in the series, and I can see why. The story is excellent. Essentially, Lucifer decides to vacate Hell and gives Morpheus, the Dream Lord, the key to Hell. What ensues is a pantheon of various deities all trying to convince the Dream Lord that they should be given dominion over Hell, and making their various cases to support their claims. The result is a highly creative view into the personalities of various gods and goddesses across diverse religions.

The book opens in the Garden of Destiny. The opening passage explores the labyrinthine paths which symbolize a human life, the choices we make, and how upon later reflection, the realization that many of the choices that we make in life are not really choices at all.

Walk any path in Destiny’s garden, and you will be forced to choose, not once but many times. The paths fork and divide. With each step you take through Destiny’s garden, you make a choice, and every choice determines future paths. However, at the end of a lifetime of walking you might look back, and see only one path stretching out behind you; or look ahead, and see only darkness. Sometimes you dream about the paths of Destiny, and speculate, to no purpose. Dream about the paths you took and the paths you didn’t take… The paths diverge and branch and reconnect; some say not even Destiny himself truly knows where any way will take you, where each twist and turn will lead. But even if Destiny could tell you, he will not. Destiny holds his secrets. The Garden of Destiny. You would know it if you saw it. After all, you will wander it until you die. Or beyond. For the paths are long, and even in death there is no ending to them.

When all the deities converge on the castle of Dream, Odin tasks Loki with observing and noting the activities of the other deities. Loki’s thoughts on the angels I found particularly interesting.

And above all, I watch the angels. They do not eat, or flirt, or converse. They observe. I watch them in awe, All-Father. They are so beautiful and distant. The feet of the angels never touch the base earth, not even in dreams. I can read nothing in their faces, much as I try. And what they are thinking, I cannot even imagine.

As I read this, it reminded me of the Wim Wenders film, “Wings of Desire.” If you’ve not seen it, it’s a classic and worth watching.

As many of you know, we are often burdened with things that we do not want, but letting go and getting rid of those burdens is not always easy. Art and literature abound with metaphors about people clinging to their unwanted baggage, dragging it painfully through life. Think of Sisyphus with his stone, or Jacob Marley dragging his chains. In this book, Dream echoes this sentiment.

They all want it, and I don’t. I never thought that disposing of the unwanted could be so hard.

Possibly my favorite passage in this book is where the angels tell the Dream Lord of God’s decree regarding the existence of Hell.

This is very Taoist, in my view. There must always be darkness to balance light, a yin to balance yang. It also makes me think of Carl Jung’s concept of the shadow:

Carl Jung stated the shadow to be the unknown dark side of the personality. According to Jung, the shadow, in being instinctive and irrational, is prone to psychological projection, in which a perceived personal inferiority is recognized as a perceived moral deficiency in someone else. Jung writes that if these projections remain hidden, “The projection-making factor (the Shadow archetype) then has a free hand and can realize its object—if it has one—or bring about some other situation characteristic of its power.”

The concept of Heaven and Hell, as Gaiman expresses it, then becomes a metaphor for the our human consciousness. Our divine consciousness cannot exist without the shadow. There must always be a balance between the light and dark within the psyche.

Anyway, this series is amazing. The writing is brilliant and the artwork if outstanding. I highly recommend this to all you readers out there. Thanks for stopping by, and keep reading cool stuff.