Metatheatricality in “The Taming of the Shrew” by William Shakespeare: A Play within a Play 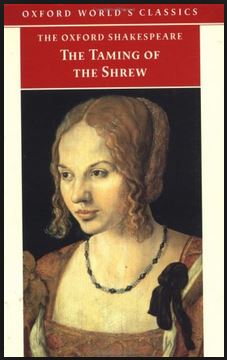 I read this play many times when I was in college, because it was part of my senior thesis, which I called “Order and Authority in Shakespeare’s Comedies.” I basically argued that Petruchio was a play on words and symbolized Patriarchy, and that the play sought to reestablish patriarchal rule that was being challenged by the reign of Queen Elizabeth. Needless to say, I didn’t feel the need to read it again for a long time. But reading it again, I realized that I had totally forgotten that this is the classic example of metatheatricality, or a play within a play.

According to the Oxford Dictionary, metatheatre is “theatre which draws attention to its unreality, especially by the use of a play within a play.”

Shakespeare places an Induction before Act I. Basically, it has a drunken tinker named Christopher Sly who passes out, and as a trick, is dressed up as a lord and treated as such when he awakens. His “servants” then have him seated to watch a play performed, which is “The Taming of the Shrew.” So unlike “The Mousetrap” within “Hamlet,” here we have the entire play set within a play.

The Induction also functions as a foreshadowing of the events that will transpire in the play itself. For example, the main theme of the duty and obedience which a wife is expected to show to her husband.

Sirrah, go you to Barthol’mew my page,
And see him dress’d in all suits like a lady:
That done, conduct him to the drunkard’s chamber;
And call him ‘madam,’ do him obeisance.
Tell him from me, as he will win my love,
He bear himself with honourable action,
Such as he hath observed in noble ladies
Unto their lords, by them accomplished:
Such duty to the drunkard let him do
With soft low tongue and lowly courtesy,
And say ‘What is’t your honour will command,
Wherein your lady and your humble wife
May show her duty and make known her love?’

And when the page meets Sly disguised as a woman, he reiterates the idea that a woman must be subservient to her husband.

My husband and my lord, my lord and husband;
I am your wife in all obedience.

In addition to the obedient wife theme, there is also the theme of clothing, and changing of clothes to change or disguise a person. This is a key component of the Induction, and then plays out in the actual play. For example, Lucentio disguises himself and takes on the name Cambio, which is Spanish for “change.” It is in this changed manner that he woos Bianca.

His name is Cambio. Pray accept his service.

I suspect that Shakespeare used metatheatre to create an additional layer of protection for himself. If the play was intended to be a subversive jab at the Queen’s authority, he could argue that it was not intended to be taken seriously, hence twice removed from reality. Artists challenging authority do so at grave risk, so one cannot be too cautious, especially in a time and place where sedition is dealt with in the harshest of ways.

8 responses to “Metatheatricality in “The Taming of the Shrew” by William Shakespeare: A Play within a Play”