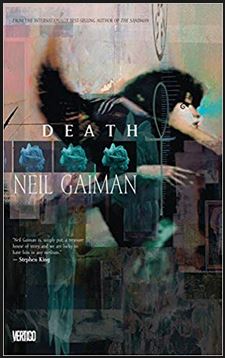 I actually finished reading this book a few weeks ago, but I’ve been in the process of moving so the book got packed and I have also been way too busy to sit down and write up a post. But, alas, I’m settled in, so here we go.

This book is an offshoot of Gaiman’s classic Sandman saga. Death is Dream’s sister, depicted as a somewhat hipster woman with a touch of goth. I’d seen this on the shelves, but hadn’t bothered to buy it since I (wrongly) assumed it was nothing more that vignettes from Sandman that featured Death. While there were a few of those, most of what is in the compilation is stuff I had not read before. Anyway, I had donated a nice filing cabinet to the local comic store prior to my move, and as a show of gratitude, the owner offered me a book, so I chose this one.

As always, Gaiman’s writing is brilliant and evocative. And the rich storytelling is augmented by the rich artwork, which makes this book something worthy of a re-read.

One of the areas where Gaiman’s knowledge excels is in mythology, so it’s not surprising that he does a little bit of myth exploration in this book.

Mythologies take longer to die than people believe. They linger on in a kind of dream country that affects all of you.

This is true. The thing about myths is that they enter into the subconscious, as well as the collective. Once embedded there, they may “die” in the sense that they fade from our ordinary state of consciousness, but it still lies hidden beneath the surface, affecting our thoughts, beliefs, and actions in ways we are not usually aware of.

Possibly my favorite passage in the book is when Death explains life to a person. I found the whole thing symbolic, that it is only through an understanding of a thing’s opposite that you can fully understand the thing itself.

Well. I think some of it is probably contrasts. Light and shadow. If you never had the bad times, how would you know you had the good times? But some of it is just: if you’re going to be human, then there are a whole load of things that come with it. Eyes, a heart, days and life. It’s the moments that illuminate it, though. The times you don’t see when you’re having them… They make the rest of it matter.

While it would certainly help to have read at least some of the Sandman saga before reading this, it is by no means necessary. I think anyone can pick up this book and get something out of it. Highly recommended, as is everything Gaiman wrote, in my humble opinion.

6 responses to ““Death” by Neil Gaiman”