“Wuthering Heights” by Emily Bronte: A Polemic Against the Patriarchy 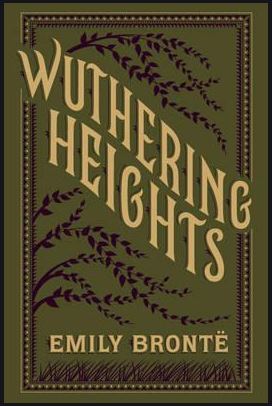 This is one of those books that I had been meaning to read for a long time. I bought a used copy many years ago, and have finally gotten around to reading it.

Emily Bronte published this book in 1847, and it provides a harsh view of patriarchal authority which sadly still resonates today as we continue to grapple with issues of gender inequality and the abuse of women.

After Catherine is forced to wed her cousin, Linton, we are presented with a horrific image of Linton’s plan to seize everything that was once Catherine’s, as well as physical and psychological abuse inflicted upon Catherine by Heathcliff, Linton’s father.

“He’s in the court,” he replied, “talking to Dr. Kenneth; who says uncle is dying, truly, at last. I’m glad, for I shall be master of the Grange after him. Catherine always spoke of it as her house. It isn’t hers! It’s mine: papa says everything she has is mine. All her nice books are mine; she offered to give me them, and her pretty birds, and her pony Minny, if I would get the key of her room, and let her out; but I told her she had nothing to give, they were all mine. And then she cried, and took a little picture from her neck, and said I should not have that; two pictures in a gold case, on one side her mother, and on the other, uncle, when they were young. That was yesterday—I said they were mine, too; and tried to get them from her. The spiteful thing wouldn’t let me: she pushed me off, and hurt me. I shrieked out—that frightens her—she heard papa coming, and she broke the hinges and divided the case, and gave me her mother’s portrait; the other she attempted to hide: but papa asked what was the matter, and I explained it. He took the one I had away, and ordered her to resign hers to me; she refused, and he—he struck her down, and wrenched it off the chain, and crushed it with his foot.”

The physical abuse is clear, but the psychological abuse is presented symbolically through the image of the locket. Heathcliff demands that Catherine give Linton the picture of her father as a symbolic gesture of her giving up all connections to her familial past and essentially becoming the property of her husband. She is not only required to relinquish all tangible property, but she must let go of her soul, of who she is, and thereby become nothing but a piece of human property, which can be done with as her husband chooses. When Catherine attempts to resist, the crushing of the locket represents the domination of patriarchal authority over her, stamping out all connections to her former self.

After Linton dies, Heathcliff takes possession of everything that once belonged to Catherine and her family. At one point, Catherine wants to use a small plot of land to create a garden. Heathcliff’s response demonstrates the patriarchal belief that a woman has no rights to any property.

“You shouldn’t grudge a few yards of earth for me to ornament, when you have taken all my land!”

“Your land, insolent slut! You never had any,” said Heathcliff.

“And my money,” she continued; returning his angry glare, and meantime biting a piece of crust, the remnant of her breakfast.

While this book shows that we have come a long way, it also reminds us that we still have a ways to go. There is still gross gender inequality, as well as disparity between socio-economic classes. But as long as strong voices such as Emily Bronte’s speak out against inequality, we can continue to move forward as a society.

4 responses to ““Wuthering Heights” by Emily Bronte: A Polemic Against the Patriarchy”