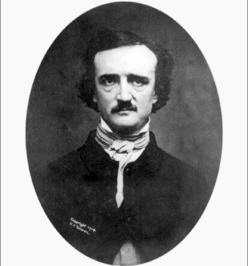 From childhood’s hour I have not been
As others were—I have not seen
As others saw—I could not bring
My passions from a common spring,
From the same source I have not taken
My sorrow—I could not awaken
My heart to joy at the same tone;
And all I lov’d. I lov’d alone.
Then—in my childhood—in the dawn
Of a most stormy life—was drawn
From ev’ry depth of good and ill
The mystery which binds me still;
From the torrent, or the fountain,
From the red cliff of the mountain,
From the sun that ’round me roll’d
In its autumn tint of gold—
From the lightning in the sky
As it pass’d me flying by—
From the thunder, and the storm,
And the cloud that took the form
(When the rest of Heaven was blue)
Of a demon in my view.

This poem was written by Poe in his youth and expresses feelings of isolation and of not belonging, which are common among young people. I can speak from my own experience that growing up I never really felt like I fit in anywhere, even though I tried to fit in everywhere. And like Poe, I found my greatest happiness in times of solitude, when I could finally take off my mask and be myself. And this is the sentiment that Poe conveys when he says “And all I lov’d. I lov’d alone.”

While this poem conveys an almost universal feeling, Poe makes it his own at the end:

From the thunder, and the storm,
And the cloud that took the form
(When the rest of Heaven was blue)
Of a demon in my view.

Here we are provided with a glimpse into the creative mind of Edgar Allan Poe. Poe’s feelings of isolation are the source of his literary expression. He does not see the world as “normal” people do. When he looks into the sky, instead of seeing the blue, he sees the clouds, which reflect the demons lurking within his psyche. And just as a child when he projects those inner demons onto the clouds, as a mature writer, he projects those demons onto his pages.

Like so many tortured youth, Poe looked to artistic expression as a way to deal with his loneliness and face his inner demons. Pain, sadness, and loneliness are prime inspiration for painters, writers, and musicians burdened with the need to have the cathartic release which art provides.

I hope this poem inspired you. Have a great day and thanks for stopping by.