This is a special edition and actually contains three stories. The first one, Into the Fire, basically moves the primary story along. Sara has reclaimed the Witchblade and is establishing a new connection with the mystical artifact. She also takes Deputy Rooney into her confidence and sits in the woods with her, ready to share her history with the gauntlet.

The second story, Temple of Shadows, is also written by Ron Marz and illustrated by Laura Braga. It tells the tale of a Japanese woman, Shiori, who was the bearer of the Witchblade during the 17th century. She does battle with an oriental beast that looks like a cross between a man and a dragon. The artwork is very good and it hints at a recurring cycle between stories and events, a concept which I personally find intriguing.

The third tale, 4 for 5, is written by Ashley Robinson and is told from the perspective of Patrick Gleason, Sara’s former partner. I liked this vignette because it explores a male character’s journey to acceptance that he is not as powerful as his strong female partner. I think that some men have difficulty reconciling their masculine roles when in a partnership with a strong woman, whether that be a work relationship or an intimate one. Fortunately, I feel that traditional gender roles are being challenged and that we are moving more toward gender equality. I hope that one day we get there.

The issue concludes with a bonus: draft sketches from Ms. Braga. I found these very interesting, particularly since I am not artistically inclined when it comes to drawing. I enjoyed seeing how the characters and scenes are sketched and outlined. It was enlightening for me.

Overall, this was the best Witchblade issue that I have read in a while. It’s worth picking up if you have not yet done so. Cheers!

Comments Off on Witchblade: Issue # 175 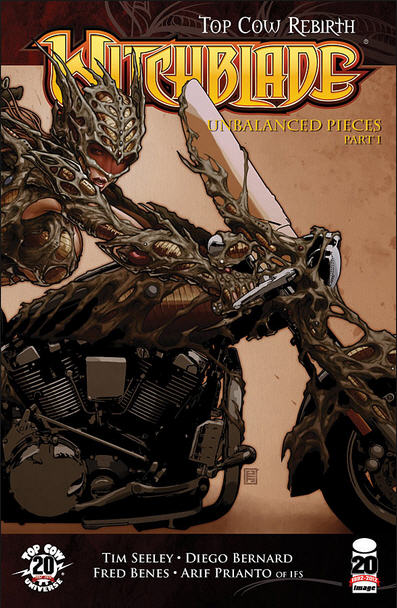 On a recent visit to the local comic store, I got into a discussion with the owner about Witchblade. I enjoyed the comic (and the short-lived television series) but had only read a few of the early issues, and they are pretty far along. Well, he let me know that issue 151 marked a “rebirth” of the saga and that it was considered a good place to pick up reading the series. I decided to give it a shot and purchased five consecutive issues beginning with issue 151.

It was pretty easy for me to pick up at this point, especially since I was familiar with the comic’s mythology. Sara Pezzini is no longer a NYC police officer. Instead, she is a private investigator in Chicago. She uses the Witchblade, a mystical artifact with occult powers, to guide her.

The artwork is comparable to the early issues, which is good. The storyline worked for me, also. But I did have one complaint, and it is really more of a pet peeve. Typos! I found a few, and yes, I know, this is a comic and my expectations should not be too high, but still. I feel like if you are going to publish something, you should spend the small amount of time and money needed to hire a decent proofreader.

Anyway, now that I have voiced my criticism, I can say that I am looking forward to reading the next issues, and I will do my best to overlook any typos.