“The Devil in the Belfry” by Edgar Allan Poe – Time, Chaos, and the Disruption of Order 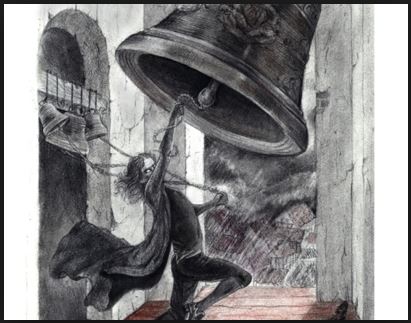 I was not sure what to expect from this tale, having neither read it before nor heard of it until I happened across it in my anthology. It is a very short parable about deviation and disruption of order, and the chaos that ensues as a result.

The story is set in a town called Vondervotteimittiss. Very early in the tale, the narrator explains that he does not know the history of the town’s name, which implies there is some significance to the name.

Touching the derivation of the name Vondervotteimittiss, I confess myself, with sorrow, equally at fault. Among a multitude of opinions upon this delicate point—some acute, some learned, some sufficiently the reverse—I am able to select nothing which ought to be considered satisfactory.

The name of the town is a sort of Germanic transliteration and play on words, so the town should be pronounced “wonder what time it is.” The key then to understanding this story is the importance of time as a constant.

The town of Vondervotteimittiss is built in a circle, symbolizing a clock and the eternal cycle of time, which is a constant. The town is comprised of “sixty little houses” which represent the sixty minutes and sixty seconds which are the foundations of time. In addition, the steeple in the center of town, which houses the great clock, has seven sides with seven clock faces, symbolizing the seven days of the week, another important symbol of time and structure.

The great clock has seven faces—one on each of the seven sides of the steeple—so that it can be readily seen from all quarters.

The final number to keep in mind is twelve, which are the numbers on the clock face and the number of months in a year.

So one day, a stranger comes into town, and the way he is described conjures the image of the devil, or possibly the trickster archetype. He commandeers the clock tower, and as the clock strikes twelve noon, he causes the clock to chime once more, making it 13 o’clock.

“Dvelf!” they replied, perfectly satisfied and dropping their voices.

“Und dvelf it iss!” said all the little old gentlemen, putting up their watches. But the big bell had not done with them yet.

Thirteen is considered an unlucky number and portends evil and disruption. What Poe is expressing here is that deviation from the norm, disruption of the perfect order of things which is symbolized by the steadiness of time, results in chaos, which is exactly what happens in the town of Vondervotteimittiss.

Meantime the cabbages all turned very red in the face, and it seemed as if old Nick himself had taken possession of every thing in the shape of a timepiece. The clocks carved upon the furniture took to dancing as if bewitched, while those upon the mantel-pieces could scarcely contain themselves for fury, and kept such a continual striking of thirteen, and such a frisking and wriggling of their pendulums as was really horrible to see.

We now accept time as something relative, but for millennia, time was the constant, so the thought of what we view as stable crumbling is a sign of chaos and collapse. I look around us and we have created an illusion of stability, but I cannot help but see the potential for chaos at the slightest deviation.

Comments Off on “The Devil in the Belfry” by Edgar Allan Poe – Time, Chaos, and the Disruption of Order