In this installment, Leia decides to trade herself for an imprisoned Alderaanian. I suspect that she has a plan and is setting the pieces in place.

There is a little sub-plot that I found more interesting than the main storyline. Leia sends Uwa and Jora to Espirion to negotiate with the Alderaanians living there and see if they are willing to join with Leia. Upon arrival, they discover that the Alderaanians on Espirion have been mating with other people and Jora expresses racist disapproval of this.

Beonel: Look at this one, Rill. Unable to conceal her bigoted disgust. She obviously didn’t come all this way to recruit half-Alderaanians.

Uwa: Please, Chief Beonel, nothing could be further—

Jora: Our world is dead, sir. All we have left is our identity. Don’t ask me to celebrate its dilution.

Racism and bigotry are sicknesses that are doing damage to our society, and I am really glad that the writers are addressing this. It is my opinion that humanity evolves and progresses when we share cultures. Trying to maintain ethnic and societal purity ultimately leads to atrophy and decay. But the roots of racism and bigotry run deep and they are weeds that are not easily extracted. I hope that one day humanity can look at differences as something beautiful and not things to be feared or abhorred.

“On Political Correctness” by Umberto Eco

This essay is included in Turning Back the Clock: Hot Wars and Media Populism and explores how political correctness has influenced language. It’s an interesting topic and one I find pertinent, since language is always evolving and the words we use to identify groups or individuals affect our collective views on these groups or individuals.

As our culture strives to become more tolerant and accepting, society tries to avoid using labels that have negative connotations associated with them. This is a good thing and a step in the right direction, in my opinion. But Eco points out something that is worth considering. He claims that by changing the labels that we use to identify people, we are essentially creating a loophole that allows society to skirt the real social issues that need addressing.

The point here is that politically correct decisions can represent a way of avoiding unresolved social problems, disguising them with a more polite use of language. If we stop calling people in wheelchairs handicapped or even disabled (they are differently abled) but fail to build them access ramps to public areas, we have clearly—and hypocritically—got rid of the word but not the problem. The same may be said of the replacement of unemployed with involuntarily leisured.

Eco also points out another issue with political correctness, that some people see it as an infringement on free speech. This is a can of worms and I am going to stay out of this argument, but I felt it was worth including just as something to think about.

… from the start PC caused a violent reaction in conservative circles, who see it as a case of left-wing bigotry and a curtailment of free speech. Reference is often made to Orwell’s newspeak and (sometimes directly) to the official language of Stalinism. Many of these responses are equally bigoted, and in fact there is a right-wing form of PC, just as intolerant as the left-wing brand. Think of the abuse hurled against those who talk of the Iraqi “resistance.”

Eco closes his essay by asserting that we should all strive to avoid using words that make others uncomfortable or cause others to suffer.

And let us stick to the fundamental principle that it is humane and civilized to eliminate from current usage all those words that make our fellow beings suffer. 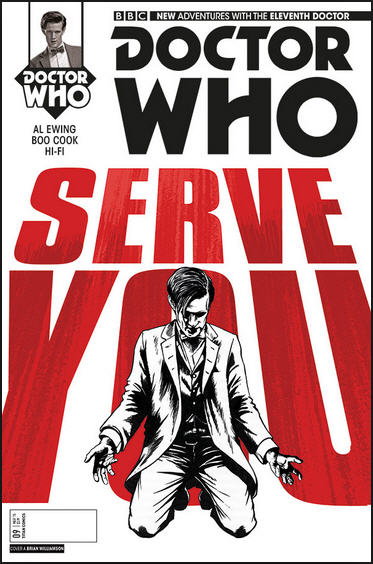 In this issue, the Doctor, Alice, Jones, and the ARC travel to SERVEYOUinc where they discover that the Talent Scout and the ARC were once one: ARC being the mind of the Talent Scout. Things go from bad to worse as the scout takes control of the Doctor. We are left with quite the cliffhanger.

This issue provides some of the strongest criticism against corporations that we seen so far in this series. Early on, the Doctor states:

A corporation is a very special kind of monster.

As they storm the corporate office, the criticism gets even stronger.

Doesn’t matter, whatever’s up there, whatever they’ve done, they’re just… monsters, that’s all. Because they don’t have the imagination not to be monsters. They can’t think of any way than cruel and cowardly.

Frankly, the more I think about this, the more disappointed I am with the writers here. I am getting tired of this mentality where we label entire groups based upon the actions of a few. This is yet another example of that tendency. I will have to consider whether or not to continue reading this series.

Comments Off on Doctor Who – Eleventh Doctor: Issue 9