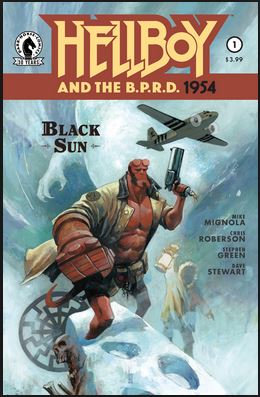 This tale is told over two issues, which I read consecutively. It’s kind of a cross between Indiana Jones and the X-Files, with Hellboy fighting Nazis who have reverse-engineered an alien craft and built a fleet of saucers which they plan to use to conquer the world and establish the 1000-year Reich.

Overall, the story was very entertaining, well-written, and the artwork was great. There were also a couple themes that were addressed that I found particularly interesting.

In the first installment, when Hellboy arrives with his field partner in the Arctic, the partner, who is black, is met with racial disdain.

What I found most striking about this short scene is that while the U.S. was fighting against an enemy that was claiming racial superiority, people in the U.S. also had their prejudices and biases. And as proven by recent events, these prejudices are still thriving in our society.

The other part of this graphic tale that resonated with me was how myths and legends are used as symbols for aspects of human consciousness.

There are, of course, countless legends about the hollow earth, and hidden passages that connect one pole to the other. I had assumed these to be a metaphor for the hidden recesses of the human mind, but they may have been a material reality.

I am reminded of the classic Journey to the Center of the Earth. I have not read the book (yet), but watched the film numerous times as a kid, fascinated with the idea that hidden below the surface of the earth was an entirely different world, populated by dinosaurs. Now as an adult, I understand the metaphor. The center of the earth is a symbol for the center of our brains, the primordial root of our consciousness, the primal animalistic part of our psyches that exists in the amygdala within the limbic cortex. The dinosaurs symbolize our collective lizard brains, a residual that we never lost through our stages of evolution.

Thanks for stopping by, and have a great day!

Rise of the Black Flame: Issue 1 of 5 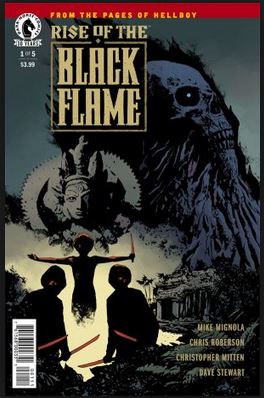 On a recent visit to my local comic store, I was surprised that the owner had added this comic to my folder. I inquired about it and was informed that it was a short five-issue offshoot of the Hellboy saga and he thought I would like it. I figured I would give it a try. I’m glad that I did.

The story begins with young girls in Burma being kidnapped and sacrificed as part of a ritualistic ceremony. While this trope may seem a little hackneyed, the strength of the story is in the subtle details within the text. These I found intriguing, even in this short first installment.

Many mystical and spiritual traditions assert that sound or vibration brought everything into existence. In fact, energy, which is the basis of all life and existence, is vibration. This concept is hinted at during an invocation early in the story.

<You are the origin of all things, and devourer of all things.> <Your perfect song can be heard in the void, but also in the hum deep within all living things in this breathing world.> <Though having form, you are formless. Though you are without beginning, so are you without end.>

Also in the short passage, we have hints of Taoism, of form and formlessness combined into one. Additionally, I see references to the ouroboros, the powerful occult symbol of wholeness and infinity. 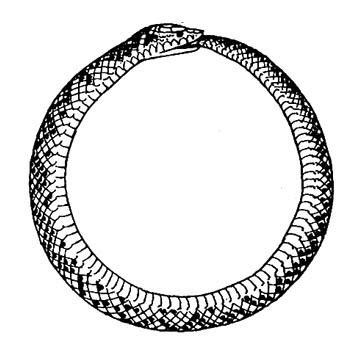 Racial and ethnic tensions seem to be running high these days, and this is hinted at in the story. There is a great panel where the British general expresses his racist views by asserting that it is one thing if Burmese children go missing, but British girls disappearing is unacceptable. This corresponds with the tendency in some places to show outrages at the death of a white person, but lack of concern over the death of a black person.

Yes, well, Burmese children might well wander away from home unattended. But two English girls missing is two too many.

Finally, in a nice twist, the strong lead character turns out to be a woman, which I love. We need more strong female characters. So while in the first part of the tale it appears that the lead characters are two men, it shifts and the main characters appear to be two women. I find this a nice balance of the masculine and feminine.

I want to close with one more quote from this issue, which resonated with me.

The world is a great deal stranger–and more dangerous–than most would credit, mon cher. 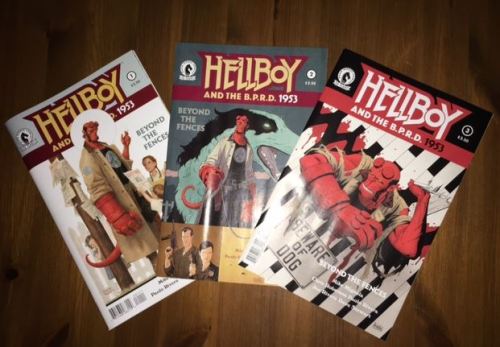 For me, one of the problems with reading serialized arcs is that I don’t remember the nuances of previous installments. So for this arc, I decided to wait, collect the three issues, and then read them in one sitting. That worked really well for me.

In this tale, Hellboy and two other B.P.R.D. agents go to a small town in California to investigate the disappearance of several children and the mutilation of an adult. The encounter the monster responsible, which is actually a dog that mutated after eating some mysterious material that was the byproduct of a nuclear test. There is also Cold War conspiracy and intrigue woven in to the tale, which works nicely.

What I found most interesting about this series was the use of the fence as a symbol. The fence serves as a metaphor for what divides the two realms of reality, existence, consciousness, and so forth. On one side of the fence is the archetypical 1950’s community, but on the other side, chaos and the psychological uncertainty in the post World War II nuclear age. Also, there is the division between ordinary reality and alternate dimensions. The fence symbolically separates what we perceive in our normal state of consciousness and what lies beyond the veil in the subconscious regions of our psyches, Moving beyond the fence and exploring these areas of the subconscious can be terrifying and dangerous.

The writers and artists who collaborate on this do an amazing job of drawing on occult philosophies, symbolism, and thought. But it’s not just heady mysticism—the story is very good and engaging. It is well-written with excellent dialog, and the artwork is top-notch. I highly recommend reading these three issues if you have time. I suspect you will enjoy them as much as I did. 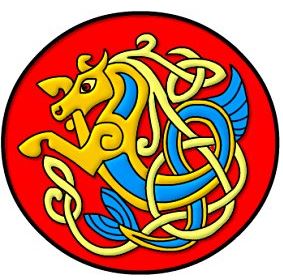 This was a short vignette included in the graphic publication, “Hellboy and the B.P.R.D. 1953: Issue 1.” The comic actually contains two tales: “The Phantom Hand” and “The Kelpie.” Both are very good and draw on supernatural folklore of the British Isles, but the tale about the Keplie really fascinated me.

I did some research into the actual mythology and discovered that it is one of the most well-known of the Scottish water spirits.

The Kelpie is the supernatural shape-shifting water horse that haunts the rivers and streams of Scotland. It is probably one of the best known of Scottish water spirits and is often mistakenly thought to haunt lochs, which are the reserve of the Each Uisge.

The creature could take many forms and had an insatiable appetite for humans; its most common guise was that of a beautiful tame horse standing by the riverside – a tempting ride for a weary traveller. Anybody foolish enough to mount the horse – perhaps a stranger unaware of the local traditions – would find themselves in dire peril, as the horse would rear and charge headlong into the deepest part of the water, submerging with a noise like thunder to the travellers watery grave. The Kelpie was also said to warn of impending storms by wailing and howling, which would carry on through the tempest. This association with thunder – the sound its tail makes as it submerges under water – and storms, may be related to ancient worship of river and weather deities by the ancient Celts, although this is difficult to substantiate.

I could not help thinking about the symbolism here, how water represents the subconscious. When being lured into the regions of the subconscious mind, there is always the possibility that one can get lost there and never be able to return to the realm of ordinary consciousness. I see this as a warning for those dabbling in the mystical arts, to beware of the temptation that could lead to one’s drowning in mysteries of the unseen world.

I really love that the Hellboy series draws on myth and folklore for inspiration. The image of Hellboy sitting amid stone monoliths in England and listening to his companions recounting the tale of the Kelpie symbolizes how these early tales can be retold and continue to inspire new generations. 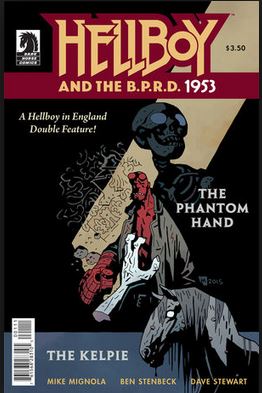 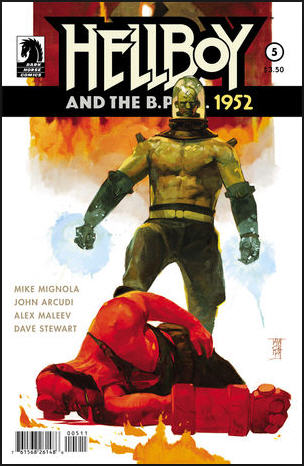 This issue concludes the mini-series. It is… OK. It did not suck, but it felt kind of rushed, like everything was quickly tied up in a neat little knot and really didn’t make a whole lot of sense in the larger story. It definitely felt anti-climactic for me. Probably my expectations were high, especially considering how good the initial issues were. Still, worth a read if you are a Hellboy fan. I’m curious to see how the 1953 series will be.

Not much else to say about this. Read on! 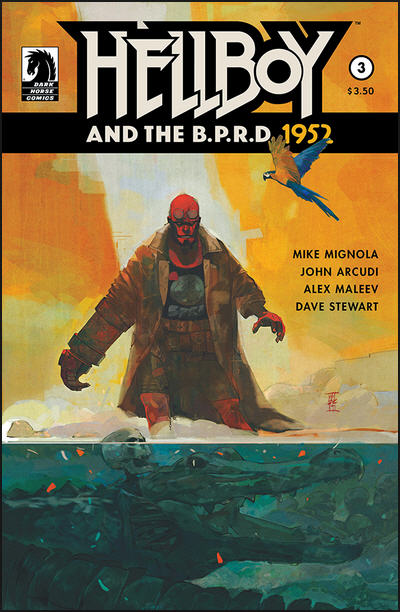 In my review of issue #2, I said that this series has sub-plots and that my impression was that a little bit would get revealed in each issue, culminating at the end. This certainly seems to be the case.

In this issue, the B.P.R.D. agents engage with the beast, which turns out to be a scientifically modified monkey, with various apparatuses attached to it. In addition, it is revealed that there is some occult activity occurring in the fortress from which the beast originated. Again, there are lots of threads to this tale, and they are slowly being woven together in a way that works well, in my opinion.

I am fascinated with stories that mix science with the occult. I see a lot of similarity. Both disciplines seek to explore hidden mysteries. It’s not surprising that occult arts were once called occult sciences, and scientific exploration was condemned by the Church.

This tale is definitely holding my interest. I’m very curious to see how everything connects and plays out. 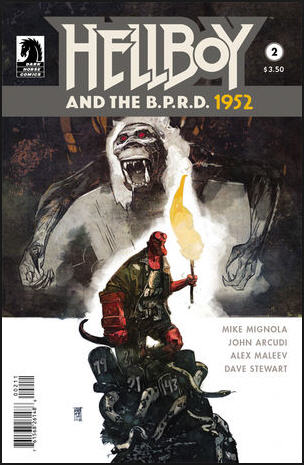 It seemed like a long time since the first issue came out, but looking back, I guess it wasn’t that long. Time must be getting weird for me.

Anyway, this is a pretty cool comic. This installment continues where issue 1 left off and has a priest chanting in Latin. Now, since I do not read Latin, I have no way of validating the accuracy of the text, but some of the words were familiar so I am going to have to go on the assumption that the writers did their homework and used actual Latin text.

Without including any spoilers, I’ll say that Hellboy and the other B.P.R.D. agents encounter some beast, which resembles a primate but with long hair. But there are several other sub-plots happening, which I can only assume are connected somehow. This adds a nice touch of mystery to this story. I get the impression that each issue will reveal a little more, and then things will all come together at the end. I have to say that I really enjoy that kind of storytelling. It helps to keep my interest.

The last thing I will say is there is a bit of a twist at the end of this issue. There are definitely some clandestine things going on. I’m quite intrigued and looking forward to seeing how it all plays out.

If you’ve read this, feel free to leave a comment with your thoughts, just try not to include spoilers. Cheers!!