Tag Archives: Chariots of the Gods

Doctor Strange and the Sorcerers Supreme #8 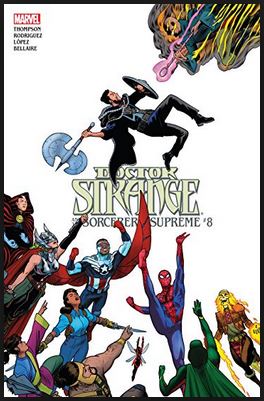 What started as a really interesting arc has completely plummeted into stupidity. I’m glad there is only one issue left; otherwise I would drop it at this point. The folks are Marvel need to learn that you do not make a story interesting by throwing more and more into it; a story is interesting when there is cohesion, thoughtful crafting of the language, and evocative imagery. To just toss in a bunch of other characters, such as Howard the Duck casting magical spells, and think you are going to appeal to a wider audience is kind of pathetic.

If resorting to inclusion of the tired Avengers wasn’t bad enough, the writers also rely on the hackneyed trope of the “word of God” actually being a text created by an alien being. Please! Erich Von Daniken wrote Chariots of the Gods? back in 1968. What’s next—mystical text as computer code?

If you read my blog regularly, you know I try to find something positive or inspirational in whatever I read. I was unable to do so here. I actually feel like I wasted the 15 minutes it took me to read this installment.

Oh well. On to other things.