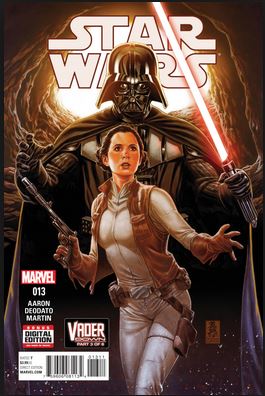 I don’t have a lot to say about this issue except that it is really, really good. The writing and artwork are both outstanding and the story is totally engaging. Since I have a warm spot for villains, I have to say that I have really grown attached to Dr. Aphra’s droids, who are like the evil twins of R2D2 and C3PO. They have just the right amount of sardonic humor which one would expect from a pair of sadistic droids. I found myself chuckling quietly as I read.

I decided to read this comic this morning because the day has finally arrived for the release of “Star Wars: The Force Awakens.” I purchased my tickets in advance and will be seeing it tonight, and fear not… there is no way I would put any spoilers in any of my posts. Honestly, I cannot remember the last time I felt this excited about a film. And I’m very grateful to the folks at Marvel for putting so much effort into these new Star Wars comics. They are great and have totally awakened the Force within me.

It’s a great time to be a nerd!

Important PS – There are some people out there who think it is funny to post film spoilers. I will let you know that all comments here are moderated and I will not be reviewing / approving ANY comments until after I see the movie tonight. I will then block anyone who attempts to sneak in a spoiler to ruin the film for others.

Comments Off on Star Wars: Vader Down – Part 3 of 6