Marlowe’s version of the Faustian legend is a cautionary tale for those who are obsessed with learning, the occult, and who suffer from pride and arrogance. “It was written sometime between 1589 and 1592, and may have been performed between 1592 and Marlowe’s death in 1593.” (Source: Wikipedia)

Early in the play, Faustus conjures the demon Mephistophilis and asks him a series of questions, including questions regarding Lucifer.

Faustus. Was not that Lucifer an angel once?

Mephistophilis. Yes, Faustus, and most dearly lov’d of God.

Faustus. How comes it, then, that he is prince of devils?

Mephistophilis. O, by aspiring pride and insolence;
For which God threw him from the face of heaven.

It is important to note that Faustus also suffers from “aspiring pride and insolence,” like Lucifer. Marlowe is foreshadowing the inevitable tragic fall of Faustus.

As is often the case, it is only when Faustus is faced with his death and eternal damnation that he realizes his mistakes and suffers the pangs of remorse.

But Faustus’ offence can ne’er be pardoned:  the serpent
that tempted Eve may be saved, but not Faustus.  Ah, gentlemen,
hear me with patience, and tremble not at my speeches!  Though
my heart pants and quivers to remember that I have been a student
here these thirty years, O, would I had never seen Wittenberg,
never read book! and what wonders I have done, all Germany can
witness, yea, all the world; for which Faustus hath lost both
Germany and the world, yea, heaven itself, heaven, the seat of
God, the throne of the blessed, the kingdom of joy; and must
remain in hell for ever, hell, ah, hell, forever!  Sweet friends,
what shall become of Faustus, being in hell forever?

While it is generally accepted that the legend of Doctor Faustus is based upon an historical figure, Johann Faustus, who lived in Germany from about 1480 to about 1541, I could not help wondering if there was another inspiration for Marlowe’s adaptation of the legend. My first thought was that Marlowe was using the character of Faustus to criticize John Dee, one of his contemporaries who was a well-known magician and practitioner of the occult.

John Dee (13 July 1527 – 1608 or 1609) was an English mathematician, astronomer, astrologer, teacher, occultist, and alchemist. He was the court astronomer for, and advisor to, Elizabeth I, and spent much of his time on alchemy, divination and Hermetic philosophy. As an antiquarian, he had one of the largest libraries in England at the time. As a political advisor, he advocated for the founding of English colonies in the New World to form a “British Empire”, a term he is credited with coining.

Dee eventually left Elizabeth’s service and went on a quest for additional knowledge in the deeper realms of the occult and supernatural.

While Marlowe could have been writing about John Dee, there is another possibility that I could not avoid considering, and that was that he was writing about himself. Marlowe died shortly after completing the play, and a close reading of the text demonstrates that Marlowe likely had studied occult philosophy. Did he sense that he was nearing his death, and did he harbor any remorse about things he did, or practices he might have engaged in? This is nothing but pure speculation on my part, but I feel that one could make a case.

As always, thanks for stopping by and sharing in my musings. Have a blessed day.

Beware of Spiritual and Intellectual Pride

These metaphysics of magicians
And negromantic books are heavenly;
Lines, circles, letters, characters—
Ay, these are those that Faustus most desires.
O, what a world of profit and delight,
Of power, of honor, and omnipotence
Is promised to the studious artisan!
All things that move between the quiet poles
Shall be at my command: emperors and kings
Are but obeyed in their several provinces
But his dominion that exceeds in this
Stretcheth as far as doth the mind of man:
A sound magician is a demi-god!
Here tire my brains to get a diety!

Comments Off on Beware of Spiritual and Intellectual Pride

Thoughts on “Henry VI, Part I” by William Shakespeare 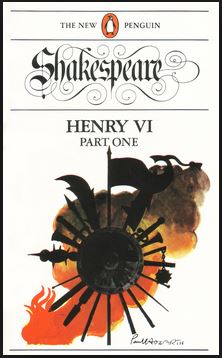 This was my first time reading this play. Honestly, I shied away from the histories in the past, and tended to focus on the comedies and tragedies. I guess some part of me felt they might not be as enjoyable. But the truth is, this is a very enjoyable play and much more interesting than I expected.

The play is steeped in politics. It is set during the English battles with the French, where Joan la Pucelle (Joan of Arc) demonstrated her force on the field. It also explores the political strife that led to the War of the Roses. So there is a lot going on, but in spite of that, it is pretty easy to follow.

There is speculation that Shakespeare may have collaborated with Christopher Marlowe and Thomas Nashe on the writing of this play.

Some regard Henry VI, Part 1 as the weakest of Shakespeare’s plays, and along with Titus Andronicus, it is generally considered one of the strongest candidates for evidence that Shakespeare collaborated with other dramatists early in his career.

Personally, I feel this play is way better that Titus Andronicus, but that’s just my opinion. That said, there are a few passages of interest that I want to share.

Charles: Then come, o’ God’s name; I fear no woman.

Joan la Pucelle: And while I live, I’ll ne’er fly from a man.

What I love about these two lines is that they succinctly sum up the patriarchy mentality, and the rejection of that paradigm. As king of France, Charles embodies the idea of male dominance. But Joan is the feminist archetype. She rejects this male-dominance idea completely, and asserts that she will never allow herself to be subservient to someone strictly based upon gender. Not surprising, men of power view strong women as a threat, labeling them as witches and servants of evil.

Here, here she comes. I’ll have a bout with thee;
Devil or devil’s dam, I’ll conjure thee:
Blood will I draw on thee, thou art a witch,
And straightway give thy soul to him thou servest.

While factionalism in politics seems extremely pronounced these days, Shakespeare reminds us that politics have always been contentious and factional.

Good Lord, what madness rules in brainsick men,
When for so slight and frivolous a cause
Such factious emulations shall arise!
Good cousins both, of York and Somerset,
Quiet yourselves, I pray, and be at peace.

As I look around me, I notice that we are living in a fear culture. The news media provides a steady stream of “what if” scenarios and opinions intended to increase your fear and keep you coming back to the channel or website. This is having a terrible effect on society, as well as on individuals. And as Shakespeare points out in this play, fear is one of the worst of human emotions.

Of all base passions, fear is the most accursed.

And the last quote I want to share concerns marriage.

A dower, my lords! disgrace not so your king,
That he should be so abject, base and poor,
To choose for wealth and not for perfect love.
Henry is able to enrich his queen
And not seek a queen to make him rich:
So worthless peasants bargain for their wives,
As market-men for oxen, sheep, or horse.
Marriage is a matter of more worth
Than to be dealt in by attorneyship;
Not whom we will, but whom his grace affects,
Must be companion of his nuptial bed:
And therefore, lords, since he affects her most,
It most of all these reasons bindeth us,
In our opinions she should be preferr’d.
For what is wedlock forced but a hell,
An age of discord and continual strife?

I love this quote because it extols the importance of love when it comes to matrimony. It is clearly a romantic view that puts the focus on the compatibility between two people, as opposed to the financial or political advantages that might be gained from an arranged marriage.

While I agree that this is not Shakespeare’s greatest play, it is still good and worth reading. If for nothing else, it provides a glimpse into the writing of a young Shakespeare, as he was developing his skills as a wordsmith.

“Shadow of Night” by Deborah Harkness

Shadow of Night by Deborah Harkness

is the second book in the All Souls Trilogy. I read the first book, A Discovery of Witches, a while back and loved it (click here to read my review of that book), so when this book came out, I immediately bought it. I did, though, have to wait for my wife to read it first.

The book is set in Elizabethan England where the two protagonists, a witch and a vampire, have traveled back in time to locate a mysterious book. Since Harkness is a history professor at the University of Southern California, she is able to weave in historical events and descriptions of the period in a way that really brings the tale to life. As a historian, she focuses on details that I would not have considered important; for example, she explains that the characters in the story wrote personal records and journals in shorthand as a way to conserve paper and ink, which were scarce and expensive during that time. As a result, historians pored over these records trying to piece together fragments of history (p. 41). I found facts like this fascinating.

The tale itself is steeped in magic and the occult. Many of the characters are historical figures from that time who were magicians, witches, alchemists, and so forth. These characters include John Dee, Christopher Marlowe, Edward Kelly, and many others. Harkness asserts that there is a parallel between magic and history: “the practice of magic was not unlike the practice of history. The trick to both wasn’t finding the correct answers but formulating better questions” (p. 340).

The story changes narrative voice throughout the book, which keeps it interesting. The majority of the narrative, though, is presented as first person through Diana. Diana is an accomplished, strong, and self-reliant woman in current times, but when she finds herself in Elizabethan England, she must act in the subservient manner which was expected of a woman. This creates a great dynamic. There is a line that succinctly expresses how it must have been for women in that period: “We women own nothing absolutely, save what lies between our ears” (p. 271).

Books are strange things. Often, when I am going through something in my life or contemplating an issue, the right information will make itself known through a book I am reading. This happened to me while reading Shadow of Night. I had been discussing empathy with some friends in the wake of the recent election and then came upon this passage: “Empathy is the secret to most things in life–including magic” (p. 530). This resonated with me on such a deep level that it almost seemed magical that the words were presented to me at the time.

I could easily write more about this book, because it is really that good. But, since I hate to put spoilers into my posts, I’ll stop here. I will say that I highly recommend this book (and the first one in the series). I am already itching for the third book. When it comes out, I’ll be sure to read it before my wife gets a hold of it.