Thoughts on the Alexandria Ocasio-Cortez Comic 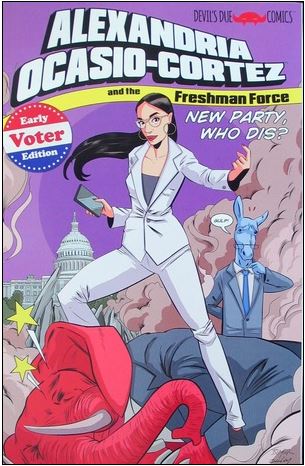 So for the past several weeks, this comic has caught my eye each time I visited the local comic store. The cover looked fun, and although I have been trying to stay out of the toxic political scene, I confess being drawn to it. I finally broke down and picked it up, and am really glad I did.

This is the “Early Voter Edition,” which essentially has a bunch of short, unfinished vignettes that promise to be fleshed out in future publications. And what I loved the most about it is that it is really fun. Politics takes itself too seriously these days. This is like a breath of fresh air, some lighthearted humor that pokes fun at the right and the left political establishments, while promoting the need for new perspectives in politics.

There is a great passage in one of the vignettes about the importance of making political action fun again, citing the example of the “outrage” surrounding Alexandria’s viral dance video.

Why did they take issue with it? Maybe it’s because they realize the key to founding any social movement is to make it enjoyable. The issues are real – single-payer healthcare, taxing the wealthy and not punishing the poor, prioritizing the environment, etc., but you have to make it festive at times so the people join for the politics, stay for the party, and endure the hardships… because they know there’s some dancing at the end.

Another thing about this comic which adds to the fun factor is the inclusion of some games, reminiscent of older comics I read as a kid. The one that made me laugh the most was the “Where’s Mitch?” game, a spoof on Where’s Waldo, where you have to locate the picture of Mitch McConnell’s face amid a myriad of turtle faces.

While I agree that there are socio-political issues that demand attention, I think everyone would benefit from taking a step back, having a good laugh, and not getting so bent out of shape all the time. Humor is essential when doing the hard work of political action. I think if we could all share a smile together from time to time, that we’d discover some common ground and maybe get some positive things done.

“Odyssey” by Homer: Book VIII – The Songs of the Harper

In this book, Alkinoos holds a feast and a competition in honor of his still unknown guest, Odysseus. During the feast, Demodokos, a blind bard, sings songs which include tales of what happened to Odysseus, which stir deep and painful emotions within Odysseus as he listens.

The element of air is symbolized through the breath of the bard, Demodokos. As the bard sings the tales of Odysseus, his breath gives life to Odysseus’ past, essentially providing immortality through the art of poetry.

The following passage is worth a closer reading because it contains the key to understanding the importance of the bard’s voice in regard to the rebirth through air.

At the serene king’s word, a squire ran
to bring the polished harp out of the palace,
and place was given to nine referees—
peers of the realm, masters of ceremony—
who cleared a space and smoothed a dancing floor.
The squire brought down, and gave Demodokos,
the clear-toned harp; and centering on the minstrel
magical young dancers formed a circle
with a light beat, and stamp of feet. Beholding,
Odysseus marveled at the flashing ring.

The first thing to notice is that this takes place in a circle, which is a symbol of rebirth and continuity. The bard is placed in the center, signifying the central importance of the singer in the divine cycle. The dancers, representing action and emanation, circle around the source of the divine breath. It is also important to note that we again see the appearance of the number nine, the importance of which was established in Book III where the number nine symbolizes the connection between the earthly and the divine.

I want to point out that Demodokos sings three times. There is symbolic significance to this, since the number three represents, among other things, the three stages of life: birth, growth, death. After that, the cycle repeats itself with rebirth.

When we get to the third song, it is Odysseus who requests the theme, which is about how he took the lead in the attack from within the wooden horse at Troy.

The minstrel stirred, murmuring to the god, and soon
clear words and notes came one by one, a vision
of the Akhaians in their graceful ships
drawing away from shore: the torches flung
and shelters flaring: Argive soldiers crouched
in the close dark around Odysseus: and
the horse, tall on the assembly ground of Troy.

Here the breath of the poet resurrects Odysseus as the words inspire visions. Words have the power to create, and many creation myths use breath or words as a symbol for the source of divine creation. For me, it makes sense that this element should be employed as the fourth level of rebirth for Odysseus.

Thanks for taking the time to read my thoughts, and have a blessed day!