“As You Like It” by William Shakespeare: All the World’s a Stage 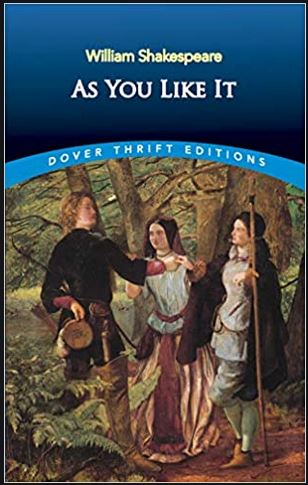 This was my first time reading this play, although I did see it performed on stage once. The play is fun and whimsical, and pretty accessible. Anyway, I figured for this post I would focus on one passage, possibly the most well-known from this particular play.

Thou seest we are not all alone unhappy:
This wide and universal theatre
Presents more woeful pageants than the scene
Wherein we play in.

All the world’s a stage,
And all the men and women merely players:
They have their exits and their entrances;
And one man in his time plays many parts,
His acts being seven ages. At first the infant,
Mewling and puking in the nurse’s arms.
And then the whining school-boy, with his satchel
And shining morning face, creeping like snail
Unwillingly to school. And then the lover,
Sighing like furnace, with a woeful ballad
Made to his mistress’ eyebrow. Then a soldier,
Full of strange oaths and bearded like the pard,
Jealous in honour, sudden and quick in quarrel,
Seeking the bubble reputation
Even in the cannon’s mouth. And then the justice,
In fair round belly with good capon lined,
With eyes severe and beard of formal cut,
Full of wise saws and modern instances;
And so he plays his part. The sixth age shifts
Into the lean and slipper’d pantaloon,
With spectacles on nose and pouch on side,
His youthful hose, well saved, a world too wide
For his shrunk shank; and his big manly voice,
Turning again toward childish treble, pipes
And whistles in his sound. Last scene of all,
That ends this strange eventful history,
Is second childishness and mere oblivion,
Sans teeth, sans eyes, sans taste, sans everything.

Let’s begin with the Duke’s lead in. He mentions “This wide and universal theatre” which in a way is almost a triple entendre. On one level, he is referring to Earth, the theatre on which we all live out our lives. But also, I would assert that a reference is being made to the cosmic play being acted out in the heavens. In Elizabethan England, the concept of the Great Chain of Being was a central tenet, basically asserting that what happens on Earth is a reflection of what is happening in the divine realm, and vice-versa. And finally, Shakespeare’s plays were performed at the Globe Theatre, and this appears to be an allusion to the Globe where the play would have been performed.

Now, Jaques’ response is a brilliant piece of writing, and if I wanted to, I could go line by line and tease out all the symbolism and metaphors, but instead, I want to hone this down and focus solely on the symbolism of the number seven. First off, if you are astute, you will have noticed that this passage occurs in Scene 7 of Act 2, something that I doubt is a coincidence. The next thing to note is that Jaques states “And one man in his time plays many parts, / His acts being seven ages.” He goes on to explain the seven stages of human development, which culminate in the final stage where man returns to “second childishness and mere oblivion,” implying the end of one cycle and the beginning of another.

Now, if we remember the concept of the Great Chain of Being, we are immediately reminded of God’s divine play in which he creates the world (or the Globe) in seven days, or in seven scenes. The correlation is being established between the seven stages of a human lifespan and the seven days of creation.

Finally, there is another level of significance for the number seven that I feel connects the divine with the mundane, and that is the known heavenly spheres, which were believed to have influence over the events on Earth. At the time Shakespeare was writing, there were seven known heavenly spheres: Sun, Moon, Mercury, Venus, Mars, Jupiter, and Saturn. The movement of these seven spheres created what was thought of as the Music of the Spheres, a philosophical concept that was prevalent in Shakespeare’s time.

The musica universalis (literally universal music), also called music of the spheres or harmony of the spheres, is an ancient philosophical concept that regards proportions in the movements of celestial bodies—the Sun, Moon, and planets—as a form of music. This “music” is not thought to be audible, but rather a harmonic, mathematical or religious concept. The idea continued to appeal to scholars until the end of the Renaissance, influencing many kinds of scholars, including humanists.

I hope I didn’t go too far down the rabbit hole in my analysis. As I said earlier on, this really is a fun and accessible play, which is both witty and romantic. If you have not read it or seen it performed, I encourage you to do so. Thanks for stopping by, and have an amazing day.