I have to say that I enjoy stand-alone comics much more than ongoing arcs, since they are like a short story and instantly gratifying to read. And this one is an excellent short tale that worked for me on multiple levels.

Hellboy, the professor, and Susan arrive in Florida to investigate cases of spontaneous combustion, an unusual occurrence which I personally find fascinating in a morbid kind of way.

The notion of spontaneous human combustion dates back to the eighteenth century, but there are legends going back centuries with similar features. And while in medieval times such deaths were attributed to demonic influence, more recently some have come to believe that there is a medical cause.

In trying to figure out whether the events were caused by an unquiet spirit, the group considers the suffering of the Seminole tribe.

The Seminole themselves were driven out by U.S. troops, forced to embark on the ‘Trail of Tears’ to make room for white settlers.

Having lived in Florida, I was familiar with the Seminole and aspects of their history. But the comic also mentions another indigenous tribe, the Timucua.

The original inhabitants of the region, the Timucua, may have been the first North American indians to encounter Spanish explorers when Ponce de Leon arrived in 1513. But the Timucua were wiped out by disease brought by the explorers, their numbers reduced from hundreds of thousands to a bare handful by the nineteenth century.

One of the things I love about the Hellboy series is that the writers consistently draw upon obscure historical information, legends, and mythology. So since I had not heard of this tribe, I did a quick web search to validate the existence of the tribe.

The Timucua were a Native American people who lived in Northeast and North Central Florida and southeast Georgia. They were the largest indigenous group in that area and consisted of about 35 chiefdoms, many leading thousands of people. The various groups of Timucua spoke several dialects of the Timucua language. At the time of European contact, the territory occupied by speakers of Timucuan dialects occupied about 19,200 square miles (50,000 km2), and was home to between 50,000 and 200,000 Timucuans. It stretched from the Altamaha River and Cumberland Island in present-day Georgia as far south as Lake George in central Florida, and from the Atlantic Ocean west to the Aucilla River in the Florida Panhandle, though it reached the Gulf of Mexico at no more than a couple of points.

Spoiler Alert: I have to give away the ending to discuss the last thing, so stop here if you plan on reading the comic and do want the ending spoiled.

It is discovered that the cause of the spontaneous human combustion is the cumulative anguish of all the people who suffered in that area.

The flames were unable to consume you, Hellboy, but you couldn’t hope to overcome centuries of pain. You could only acknowledge it. Remember it.

For me, this was a very powerful and symbolic image. Pain and suffering is symbolically represented as a burning within an individual, or collectively within a group or culture. Eventually the pain and suffering rises to the surface resulting in violent outbursts. We often think we can fight this type of burning rage, but we cannot. Fighting it only increases the pain and stokes the flames of hatred and anger. It is only through acknowledgement, empathy, and compassion that we can begin the healing process.

One last thing I want to say about this comic: the writing and artwork are both amazing. Even if you are not a fan of the genre, you will undoubtedly be impressed by the brilliance of the creative team reflected in these pages. I highly recommend this to all readers.

I love when graphic novels explore current and relevant themes. This issue begins with an Arabic refugee who blows himself up, not as an act of terrorism, but because of some unseen supernatural forces. Hey, this is an X-Files story. But what I found most fascinating was the exploration of what it is like to be a refugee, to pack up what little you can carry, and flee with your family into the unknown.

But I feel it is important for people to understand these are people fleeing from extremism and war. A man like Qasim packed up his family before dawn and prayed they wouldn’t be discovered by fighters on the road, or bombed from the air as they ran. He risked all he had, trading pride for survival like so many before, as he led them toward what he hoped was a better life.

Many of the people my organization helps have endured incredible hardships. Crossing the Aegean Sea to reach Greece, many refugees fleeing middle-eastern strife witness children drowning when the overburdened boats their parents traded all they had of value for passage on capsize and sink. Those who survive the passage are soon met by overwhelmed local populations, stretched economies and resources—as well as the patchwork of international-aid distribution struggling to keep up. From there, they travel thousands of kilometers across the continent—mainly on foot—where they are met by protests and abuse and all manner of terrible conditions. For those who endure this journey, only hope sustains. Only the want to provide and do better for his children moves a man to undertake such a trial.

I lived in Florida during the Haitian refugee crisis, and I still vividly recall the hostility with which they were met. I knew someone who bragged about throwing rocks at a boatload of Haitians as their boat approached the shoreline. I personally had the utmost respect for the Haitian people and went with them to demonstrate at the INS office against the forced repatriation.

Most of us have no idea what it must be like to risk everything to escape a situation that is so dire that remaining is not an option. I hope that I never have to experience this in my lifetime.

Magneto: Issue #3 – Segregation and the Liminal 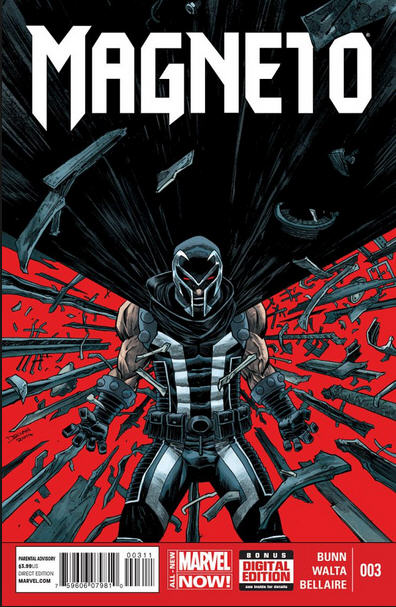 This is an excellent installment that deals with some deep social issues, particularly segregation and the hardships faced by people living on the edge of society.

Liminal people are individuals who are transitory or exist on the fringe. Most often, they are homeless or migrant workers, people who have not been able to occupy a space within the construct we call “normal society.” Often, seeing luminal people makes us uncomfortable. There could be several reasons for this: fear that we are just a few paychecks away from losing what we have; a sense of guilt or shame at seeing others that we cannot aid; and yes, self-righteous disdain and disregard for people we judge as lazy and hence inferior to ourselves.

Issue #3 opens with a scene in a tent city, where homeless people on the fringe of society have tried to build a community for themselves. Like all luminal groups, mainstream society does not want to see them or think about them, and the government officials are quick to find reasons to displace these individuals, pushing them farther away from society.

Female agent: The man you aided…Magneto…is a wanted terrorist.

Male agent: Tell us where he went and this will go much better for you.

Homeless man: If I could help you, I would.

Female agent: I hope you understand we feel the same way. We may have additional questions for you. In the meantime, one of the officers will be along shortly to help you…in moving off-site.

I lived in South Florida for many years. That area boasts an abundance of gated communities intended to provide a sense of safety and security to those who choose to live enclosed by gates and walls. It is, in essence, a self-inflicted segregation, separating themselves from others who they fear, who may be different, and who do not fit into the same social mold. I lived in one of these places and I can assure you, there is no sense of community there. In fact, it is quite the opposite. I actually felt more isolated in this manufactured “community” than I do in my current, organic and integrated neighborhood.

In this issue of Magneto, the humans who fear the mutants seek to create their own “gated community” which will provide them with their false sense of protection against those who are different and hence threatening.

“This is meant to be a peaceful refuge for humans…for those who fear what mutants might do…what they might become. Once the facility is complete…we’ll be protected. We’ll be protected because we’ll be segregated.”

This comic forces us to take a hard look at ourselves, at our beliefs and our actions. The media has a tendency to fuel the fires of fear and many respond in a manner that is not in the best interest of society. We extract ourselves, isolating from those that we do not understand and hence make us feel afraid. Fear is often the root of social injustice. I think it is a pretty safe assumption that a society based on fear is doomed to fail. I hope that we can replace some of our fear with trust and acceptance.

Thanks for stopping by and taking the time to read my post.