“Odyssey” by Homer: Book XXI – The Test of the Bow 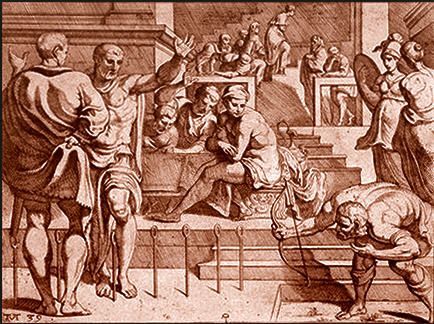 In this episode, Penelope announces she will marry the suitor who can string Odysseus’ bow and shoot an arrow through a line of 12 axe heads. The suitors all fail, and then Odysseus, still disguised as a beggar, easily strings the weapon and shoots an arrow through the axe heads.

The first thing I considered when I read this episode was the symbolism of the 12 axes. My initial thought is that the axes represent the 12 zodiac signs. There is a lot of support for astrological symbolism incorporated into The Odyssey. For more information on this topic, I recommend visiting the Symbol Reader blog. Search the page for posts on The Odyssey. There are several very good posts there on astrological symbolism in the text.

When Odysseus asks for a try at the bow, the suitors are opposed. Telemachus speaks up and strongly asserts his right over who can use the bow. The bow, therefore, becomes a symbol of authority over the household. Once the bow is placed into Odysseus’ hands, then he will once again be master of the house.

Mother, as to the bow and who may handle it
or not handle it, no man here
has more authority than I do—not one lord
of our own stony Ithaka nor the islands lying
east toward Elis: no one stops me if I choose
to give these weapons outright to my guest.

Finally, there is another analogy regarding the bow that is worth noting. The narrator (which we can assume is Homer as poet/bard) establishes a connection between Odysseus’ bow and the harp of the poet/bard. Homer is asserting that warriors and poets are similar in essence, that deep down in the psyches of both, there is a shared attribute which both the bard and the warrior possess.

But the man skilled in all ways of contending,
satisfied by the great bow’s look and heft,
like a musician, like a harper, when
with quiet hand upon his instrument
he draws between his thumb and forefinger
a sweet new string upon a peg: so effortlessly
Odysseus in one motion strung the bow.
Then slid his right hand down the chord and plucked it,
so the taut gut vibrating hummed and sang
a swallow’s note.

“Odyssey” by Homer: Book VIII – The Songs of the Harper 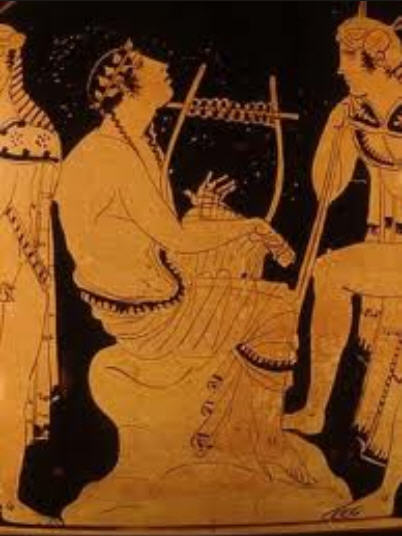 In this book, Alkinoos holds a feast and a competition in honor of his still unknown guest, Odysseus. During the feast, Demodokos, a blind bard, sings songs which include tales of what happened to Odysseus, which stir deep and painful emotions within Odysseus as he listens.

The element of air is symbolized through the breath of the bard, Demodokos. As the bard sings the tales of Odysseus, his breath gives life to Odysseus’ past, essentially providing immortality through the art of poetry.

The following passage is worth a closer reading because it contains the key to understanding the importance of the bard’s voice in regard to the rebirth through air.

At the serene king’s word, a squire ran
to bring the polished harp out of the palace,
and place was given to nine referees—
peers of the realm, masters of ceremony—
who cleared a space and smoothed a dancing floor.
The squire brought down, and gave Demodokos,
the clear-toned harp; and centering on the minstrel
magical young dancers formed a circle
with a light beat, and stamp of feet. Beholding,
Odysseus marveled at the flashing ring.

The first thing to notice is that this takes place in a circle, which is a symbol of rebirth and continuity. The bard is placed in the center, signifying the central importance of the singer in the divine cycle. The dancers, representing action and emanation, circle around the source of the divine breath. It is also important to note that we again see the appearance of the number nine, the importance of which was established in Book III where the number nine symbolizes the connection between the earthly and the divine.

I want to point out that Demodokos sings three times. There is symbolic significance to this, since the number three represents, among other things, the three stages of life: birth, growth, death. After that, the cycle repeats itself with rebirth.

When we get to the third song, it is Odysseus who requests the theme, which is about how he took the lead in the attack from within the wooden horse at Troy.

The minstrel stirred, murmuring to the god, and soon
clear words and notes came one by one, a vision
of the Akhaians in their graceful ships
drawing away from shore: the torches flung
and shelters flaring: Argive soldiers crouched
in the close dark around Odysseus: and
the horse, tall on the assembly ground of Troy.

Here the breath of the poet resurrects Odysseus as the words inspire visions. Words have the power to create, and many creation myths use breath or words as a symbol for the source of divine creation. For me, it makes sense that this element should be employed as the fourth level of rebirth for Odysseus.

Thanks for taking the time to read my thoughts, and have a blessed day!