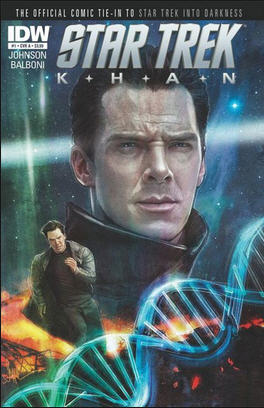 Yes, I love Star Trek, so when I heard that IDW was running a comic series on the origins of Khan, I knew I had to read it. I went to the comic store, but they had already sold out of the first issue. Thankfully, they got more in and I was able to purchase a copy.

The story begins with a Federation trial where Khan is facing charges. Kirk asks him to come clean and give a truthful account of his origins. He agrees, and thus begins the tale.

The first issue traces Khan’s childhood as an orphan in India. He is rounded up with other orphans and subjected to genetic experimentation designed to create a perfect soldier. In addition to the genetic modifications, he is also subjected to psychological conditioning designed to stifle fear and compassion. The issue ends with Khan leading the eugenic soldiers in an uprising against their genetic creator and about to enter the world.

OK, so as a pseudo-trekkie, I admit that I am somewhat biased. That said; I really enjoyed the first installment. I found the writing to be solid, the artwork is very good, and the story is consistent with the Star Trek films. Also, I am fascinated with villains, and Khan is one of the greats, right up there with Iago and Raskolnikov. If you like comics and Star Trek, then this is a must-read for you; if not, you should probably avoid it at all costs.