My mother groand! my father wept.
Into the dangerous world I leapt.
Helpless, naked, piping loud;
Like a fiend hid in a cloud.

Struggling in my father’s hands,
Striving against my swaddling bands;
Bound and weary I thought best
To sulk upon my mother’s breast.

For a short poem of only eight lines, there is a lot going on here and there are multiple ways that this poem can be interpreted. First, we can take the poem at face value. During the Industrial Revolution at a time when poverty was rampant, having another mouth to feed would have certainly been a hardship for two parents. In addition, I can only suspect that the infant mortality rate was quite high, which would add another level of sorrow for a child.

There are some images that lead me to consider another interpretation of this poem. In the first stanza, the baby is described as “a fiend hid in a cloud.” And in the second stanza, we have images of bondage and struggling against the father. This leads me to wonder if the infant in this poem is a symbol for Lucifer, an angel who struggled against god, was cast down into this “dangerous world,” and is ultimately bound here. If one considers Lucifer to be another manifestation of the Prometheus myth, then the images of bondage definitely work to support this idea.

Finally, there is one other possible interpretation; that the man and the woman are Adam and Eve, and the infant is their first-born son, Cain. Being the first human born into the world according to Judeo-Christian belief, he would have been born into a world infinitely more dangerous than Eden. Cain would ultimately murder his brother, Abel, and spend the rest of his days in sorrow. It is also worth noting that Adam and Eve are depicted as weeping and mourning the death of Abel, so the imagery of the groaning mother and weeping father can be tied into this interpretation.

Blake’s poems are so rich and fascinating; I am always in awe at how he managed to include so much in so few words. Hope you enjoyed this post. Have a great and inspired day!! 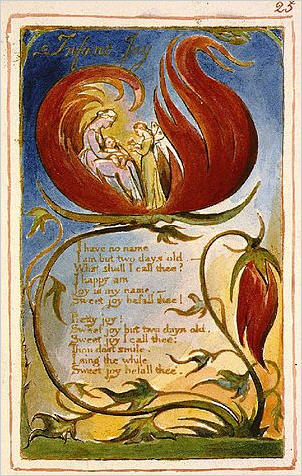 I have no name;
I am but two days old.
What shall I call thee?
I happy am,
Joy is my name.
Sweet joy befall thee!

This is a very simple and loving poem, and there is really not a whole lot that needs to be said about it. It is an expression of a mother’s joy as she beholds her newborn infant. There is one bit of symbolism that is worth pointing out, though, and that has to do with Blake’s illustration.

In the illustration, the mother and child are resting within the blossom of a flower as an angel attends them. I see the blossoming flower as the loss of virginity, so it appears to me that the young woman was blessed with a child upon offering up her virginity. It is also possible that the infant is the baby Jesus. One could certainly interpret the symbolic combination of flower, mother, infant, and angel to be representative of the Immaculate Conception.

There isn’t anything else I have to say about this poem, but if you have other thoughts or interpretations, please feel free to share them.