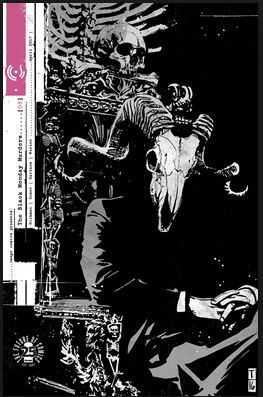 In our current environment, a tale about dark occult influences on the mega-wealthy and powerful individuals that manipulate and control global economics is bound to be interesting. But this graphic series is much more than just an entertaining look at some conspiracy theory; it’s a deep probing into mystical thought and the symbols associated with money and power. The writers of this series took an extended break since issue 4, which was released back in November of 2016, but they are back now with another engaging installment in the arc.

There is an abundance of rich text, artwork, and ideas crafted into this issue. Much of it is connected to the various threads which woven together create this complex story and would be difficult to convey without spending a lot of time and page space explaining the back story. But there is a great section that I want to share that I think adequately conveys the complexity and thoughtfulness of this series. It’s a discussion about the difference between the disciples Judas and Peter.

Doctor: Then you know of Peter — on whose back Christ’s church was built – and Judas – who with a kiss – betrayed him for thirty pieces of silver. It’s fascinating to me how many people misinterpret the point of their story. Haven’t you ever wondered why Judas – who only betrayed Christ once – is the fallen sinner of the story, and Peter is the redeemed? After all, Peter denied the Son of God three times – each denial a separate betrayal. Can you guess, detective… why the greater offender became a saint, while the other hung from a tree?

Detective: I have no idea.

Doctor: Judas, you see… he took the money.

Detective: I don’t see how that –

Doctor: If you’re going to understand how all this works, detective, then you’re going to have to remember one key thing: money is the physical manifestation of power. And when I say power, yes, I mean powers beyond our mortal ken.

This conversation really struck me and caused me to think. There are many reasons why a person might deny the spiritual and the divine, such as fear, doubt, suffering, obsession with physical pleasure. The list goes on. So what makes the rejection of the divine for the sake of wealth so much worse? Christ famously stated: “And again I say unto you, It is easier for a camel to go through the eye of a needle, than for a rich man to enter into the kingdom of God.” And remember how angry Christ got about the moneychangers? If I recall, that was the only time that he lost his cool. I think that all this is pointing the fact that money and wealth symbolizes power of an individual over a large group of people. If humans are beings made in the image of God and filled with the spark of the divine, then it must be the epitome of evil to exercise dominion over people who are in essence divine spiritual beings.

This is the third installment in a complex graphic novel about Wall Street power brokers drawing on occult powers to maintain wealth and control. The story is so labyrinthine that with each layer that you peel back, you uncover more questions and uncertainty. It’s like a puzzle that gets more complicated the more you work on it, which makes reading this both frustrating and exhilarating.

But this is how secrets work, no? They hide in the shadows until they grow into something… uncontrollable.

I find this quote fascinating because it is true on multiple levels. On a personal level, when you keep secrets, those secrets morph into something else that is often detrimental to an individual. I was told that we only as sick as our secrets, and I truly believe this. When we hide things in the shadows of our consciousness, it changes us in ways we often cannot imagine. But this is also the case on a larger scale. I cannot help but think of governments and corporations, these massive institutions that specialize in hoarding information and secrets. While this may seem beneficent at first, especially when the keeping of secrets is done with the best intentions, the institution begins to change, and we are left with something else, something that exists solely to gather and keep secrets, which are the currency of power.

The other quote that intrigued me regards Wall Street.

The history of Wall Street is written in blood… it’s an industry built on human sacrifice.

Humans have always sacrificed themselves for money, symbolized by Mammon. They sacrifice their happiness and exploit others for the pursuit of Mammon, the manifestation of greed and material wealth. People become nothing more than objects to exploit in the endless quest for more power and more wealth, because once you get caught in this trap, there is never enough, you are always left wanting more, and more, and more. This is the dark side of our material world.

As I watched Wall Street rally this past week, I could not help wondering about the forces that fueled this surge and what it means for the average person. Those who are in power and have access to secrets see sociopolitical events differently than most of us. I wonder what they see in our future. 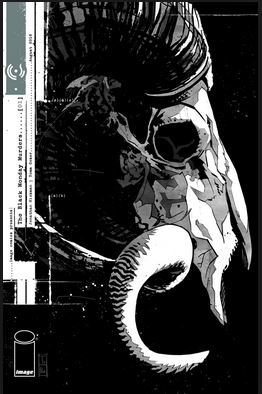 I recently went to pick up my weekly cache of comics and the owner had dropped a copy of this new graphic novel in with my usual collection, assuming it would be something I would enjoy. I was hesitant, so I left it in the folder until the following week, figuring I would research the comic online and read about it before committing. What I read piqued my interest, to say the least. So I purchased it the next week and just now read it. I was not disappointed!

Basically, this is a story about occult forces manipulating global investment banking. While this in and of itself is more than enough to warrant taking on yet another reading commitment, there is much more to this tale that promises a deep exploration of who we are as a society.

Whether we want to admit it or not, we are addicted to money and power. We might like to tell ourselves that we are detached from our material things, but are we really? I used to feel that way until I was living on Miami Beach and Hurricane Andrew was bearing down. I had to evacuate, and as I looked around my apartment at all my “material things,” suddenly, everything took on new meaning. My books, my records, my instruments, my photo albums, my games, my keepsakes—all this I assumed would be lost, and I cried. And I had to accept that I was attached to my things.

Anyway, this first issue asks readers to take an honest look at their relationship with money.

The oldest relationship in the world is the one man has with money. It’s the dirty little secret we all share . . . just how much we love it. It’s a better life. It’s living in a better world. For money is power, it is influence. So when someone asks, do you have a price? Everyone — and I mean everyone — knows the answer is yes . . . The only question remaining is . . . what are they gonna have to pay?

The installment concludes with definitions of money, power, and magic, and the connection between the definitions of these words portends what we can expect in subsequent issues.

I’m looking forward to the next installment. As soon as it is published, you can expect my thoughts to follow shortly afterward.