This book was difficult to find. I had been keeping an eye out for it for a while, since I am a fan of Edward Abbey and particularly enjoyed The Monkey Wrench Gang, of which Hayduke Lives! is the sequel (published posthumously in 1990). I eventually found a copy at Blue Bicycle Books in Charleston, SC, a cool used and antiquarian bookstore. Anyway, I bought the book and finally got around to reading it.

While I do not think the book is as good as The Monkey Wrench Gang, nor as good as Desert Solitaire, it is decent and worth the read. Basically, the old gang from the first book teams up again to save the environment from the evil government-backed corporate interests seeking to destroy the pristine wilderness for the quick extraction of resources.

The first thing that struck me about this book is how little has changed in the 27 years since it was published. People still believe the lies that raping the environment will create jobs, and that jobs are more important than protecting the planet.

…”good folks of southern Utah and the Arizona Strip, listen to me. I’ll only take a minute, just like everybody else I’ll speak my little piece and let you go. [Crowd resumes seats.] Thank you. Now we heard a lot today, especially in the last ten minutes, from those good neighbors of ourn, Mr. and Mrs. Kathy Smith [laughter] about how dangerous this nuclear industry is. Uranium is poison, they say. Well I want to tell you folks something different: that uranium smells like money to me. [Cheers!] It smells like jobs to me. [More cheers!] Hundreds of jobs right here in Hardrock and Landfill County and and just across the line in northern Arizona. Hundreds? I mean thousands of jobs. [Thunderous applause!]

Abbey appears to be very critical of the news media. At one point, one of the characters asserts that the only intelligent part of a newspaper is the Letters column.

When looking for wit, wisdom, knowledge or intelligence in a newspaper, any newspaper, your only hope is the Letters column.

Sadly, though, this is no longer true. With the proliferation of social media and online commenting, comments and letters have sunk to a new low. People now use online commenting to spew vitriol based upon pre-established beliefs about biased news articles. It seems that every day it becomes more and more difficult to find thoughtful and unbiased information regarding world events. It’s kind of sad.

As the book progresses, Abbey paints a bleaker, misanthropic view of humanity. It appears that he acknowledges the good of individuals, but sees the whole of humanity as petty, mean-spirited, and just outright dangerous.

“People are no damn good,” agreed Seldom. “Take ‘em one at a time, they’re all right. Even families. But bunch ‘em up, herd ‘em together, get ‘em organized and well fed and branded and ear-notched and moving out, then they’re the meanest ugliest greediest stupidest dangerest breed of beast in the whole goldang solar system far as I know.”

Without giving away the story or spoiling anything, I will say that the gang is seeking to stop a machine called GOLIATH, which is a giant earth mover used in strip mining. Symbolically, I see the machine as representing America as controlled by massive corporations, a mindless machine whose only purpose is to acquire and consume in an endless cycle until nothing is left. Abbey implies that it is only through radical action and anarchy that our country has any chance of defeating the leviathan of greed that dominates our world.

He waited, frowning into the gloom, looking two miles west at the glinting strobe light of the Super-G.E.M. He heard no roar of motors. GOLIATH had paused. Was down, waiting. Waiting for him, Hayduke, George Washington Hayduke, father of his country. Not the America that was – keep it like it was? – but the America that will be. That will be like it was. Forward to anarchy. Don’t tread on me. Death before dishonor. Live free or fucking die. Etc., etc.

Edward Abbey’s earlier works inspired the Earth First! movement, so it was interesting to read Abbey’s commentaries on the movement which were woven into this book. In fact, Earth First! founder Dave Foreman makes a cameo character appearance in the text.

Abbey once stated that “If wilderness is outlawed, only outlaws can save wilderness.” Our planet is still in peril and there is a lot of work to be done on the environmental front. I encourage everyone to do their own small part.

If you want to learn a little more about Edward Abbey, here is a good article on Wilderness.net:

Comments Off on “Hayduke Lives!” by Edward Abbey

Appealing to the Masses 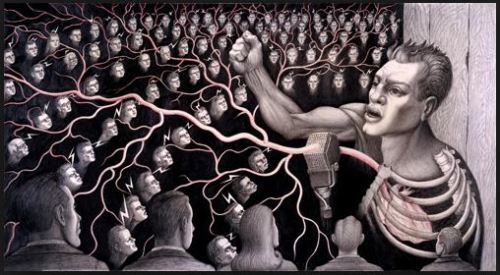 As we near the end of what may be the longest and most contentious election in US history, I have been thinking a lot about something I read in my college English Composition textbook (which I still have after all these years). It was in a section explaining how rhetoric is used to appeal to a crowd of people, and the importance of using key words that tap into the fears and prejudices of the audience. Anyway, here is the quote:

(Excerpt from speech by Adolf Hitler: Strategies for Successful Writing)

Fear seems to be the driving motivator in this election, and regardless of a person’s political inclination, fear and insecurity are the primary impetuses in candidate selection. People supporting Trump are afraid that they are losing their jobs, that they are not being heard and represented, and that the country is heading in a direction that contradicts their beliefs. On the flip side, people supporting Clinton fear increasing racism and intolerance, increased influence of corporate interests, and loss of women’s rights. Add to that the fact that everyone, regardless of political affiliation, is concerned about terrorist threats and political instability in other countries. Put all this together, and you have an election based upon fear, which is stoked by a media that seeks to capitalize on this widespread sentiment.

I am not going to tell you who to vote for, because it is your choice and you have the right to vote your conscience. I would encourage everyone, though, to take a step back, take a deep breath, and try to make a decision that is less fear based. It is tough—trust me, I know—but it is important.

Thanks for stopping by, and keep reading and thinking.