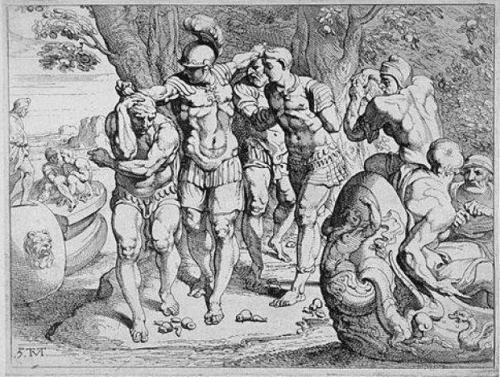 Episode 5 corresponds with Book 9 in Homer’s Odyssey, which tells of the lotus-eaters. According to Greek mythology, the lotus-eaters “were a race of people living on an island near North Africa (possibly Djerba) dominated by lotus plants. The lotus fruits and flowers were the primary food of the island and were narcotic, causing the people to sleep in peaceful apathy.” (Wikipedia) This episode of Joyce’s novel incorporates imagery of drugs, plants, and placidness.

Early in the episode, Joyce establishes the connection between flowers and drowsiness.

The far east. Lovely spot it must be: the garden of the world, big lazy leaves to float about on, cactuses, flowery meads, snaky lianas they call them. Wonder is it like that. Those Cinghalese lobbing around in the sun, in dolce far niente. Not doing a hand’s turn all day. Sleep six months out of twelve. Too hot to quarrel. Influence of the climate. Lethargy. Flowers of idleness.

There are a couple interpretations for this passage. On one level, it implies that narcotic flowers, such as the opium poppy, cause persons to lose themselves in a drug-induced daze, essentially losing touch with reality. But I feel that Joyce is also associating sex with drugs, the flower representing a woman’s sexuality. It is easy to lose oneself in the pleasure of sexual ecstasy and to lose interest in the world around.

We discover in this episode that Leopold Bloom is engaged in clandestine correspondence with a woman named Martha and that these letters they are writing are sexual in nature. While Bloom has not consummated any physical intimacy with Martha, it is evident that she wants to take it to the next level. I couldn’t help thinking how if this scene was written today, they would be meeting in a chat room or sending emails to each other. What I found most interesting about this correspondence and what makes it important to this episode is the pen name that Bloom uses: Henry Flowers. There is the association between his real and assumed last names, both of which tie into the theme of the lotus-eaters. There is also a sense that Bloom is using these letters as an escape from reality. What Leopold and Martha share is an illusion, a distraction from what is actually happening.

According to Karl Marx, religion is the opiate of the masses. Joyce draws on this concept by adding a scene in which Bloom enters a church and then considers how some cultures would actually prefer real opium to the numbing religion offered by the church.

Same notice on the door. Sermon by the reverend John Conmee S. J. on saint Peter Claver and the African mission. Save China’s millions. Prefer an ounce of opium. Celestials. Rank heresy for them.

After leaving the church, Bloom stops into a pharmacy. The pharmacy is depicted as an almost alchemical lab, where the chemist produces drugs, lotions, and perfumes all intended to induce a state of drowsiness and forgetfulness.

The chemist turned back page after page. Sandy shriveled smell he seems to have. Shrunken skull. And old. Quest for the philosopher’s stone. The alchemists. Drugs age you after mental excitement. Lethargy then. Why? Reaction. A lifetime in a night. Gradually changes your character. Living all the day among herbs, ointments, disinfectants. All his alabaster lily-pots. Mortar and pestle. Aq. Dist. Fol. Laur. Te Virid. Smell almost cure you like the dentist’s doorbell. Doctor whack. He ought to physic himself a bit. Electuary and emulsion. The first fellow that picked an herb to cure himself had a bit of pluck. Simples. Want to be careful. Enough stuff here to chloroform you. Test: turns blue litmus paper red. Chloroform. Overdose of laudanum. Sleeping draughts. Lovephiltres. Paragoric poppysyrup bad for cough. Clogs the pores or the phlegm. Poisons the only cures. Remedy where you least expect it. Clever of nature.

The episode ends with Bloom in a bath. He is giving in to the narcotic state, his flaccid penis floating in the water being symbolic of the dull state of all mankind, having lost all virility.

He foresaw his pale body reclined in it at full, naked, in a womb of warmth, oiled by scented melting soap, softly laved. He saw his trunk and limbs riprippled over and sustained, buoyed lightly upward, lemonyellow: his navel, bud of flesh: and saw the dark tangled curls of his bush floating, floating hair of the stream around the limp father of thousands, a languid floating flower.

Check back soon for my thoughts on Episode 6, which ends on page 115 with the line “How grand we are this morning.”