Madeleine L’Engle’s “A Wrinkle in Time: The Graphic Novel” by Hope Larson 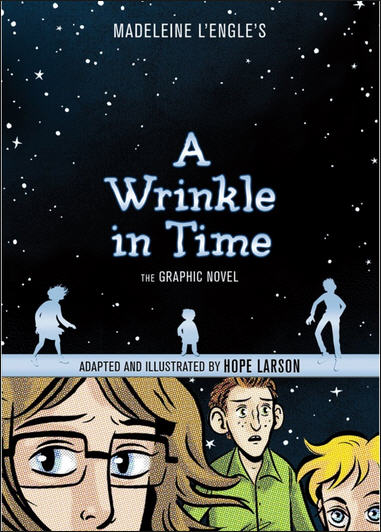 Earlier this year, my daughter and I attended a convention and Hope Larson was one of the guests. We picked up a copy of this book and got it signed, then it joined the other books on the waiting list. Anyway, I finally got around to reading it.

I remember reading the original book as a kid, but it was so long ago that I really didn’t remember anything about the story. What I did remember was the impression it left, that I had really liked it and that I had felt inspired after reading it. Since I do not remember the details of when I read the book back in elementary school, I cannot say for sure how accurate Ms. Larson’s adaptation is to the original, but I will go on the assumption that it is true to L’Engle’s classic.

The first thing I want to say about this book is that the artwork is excellent. Larson uses shades of blue and black in all her panels, and it works very well. As I allowed the images to guide me through the story, I actually felt like I was moving through another dimension. The color scheme gave everything a slightly dreamlike or surreal quality, while the images kept me somewhat grounded. There is one image of Meg glaring angrily at someone, and she is literally staring daggers. It is a great image and I laughed out loud when I came across it.

Now on to the text.

I could not help but interpreting the three women who guide the children through time and space as a manifestation of the Triple Goddess: Mrs. Whatsit (the younger of the three) representing the maid, Mrs. Who representing the mother, and Mrs. Which as the crone. Each of the women seems to embody the characteristics that you would expect from the aspect of the Goddess that they represent.

Charles: On Camazotz we are all happy because we are all alike. Differences create problems. You know that, don’t you, dear sister?

Charles: Yes, you do. You’ve seen at home how true it is. That’s the reason you’re unhappy at school. You’re different.

Charles: But you pretend that you aren’t different.

Meg: Maybe I don’t like being different, but I don’t want to be like everybody else either.

Another passage that fascinated me was when Meg’s father explains to Calvin how he was able to resist IT.

Because IT’s completely unused to being refused. That’s the only reason I could keep from being absorbed, too. No mind has tried to hold out against IT for so many thousands of centuries that certain centers have become soft and atrophied through lack of use.

There is a lot to consider in this brief passage. Firstly, if we interpret IT as a symbol for institutional authority that demands conformity, then this passage can be viewed as encouraging dissidence and a breaking of social mores. The only way that society advances is when brave individuals challenge the accepted beliefs and refuse to be just another cog in the wheel. But there is something else that really struck me about this passage: the issue of parts the brain becoming atrophied through lack of use. I truly believe this, and I believe it on two levels. Certainly, mental stimulation helps keep the brain sharp (hence I am such an obsessive reader). But also, I think this ties into thought and consciousness. There are parts of our psyche that are neglected as we go through our mundane routines of daily life. We can easily forget to exercise our creative sides through art, meditation, visualization, spirituality, and such. If we go down that path of neglecting our spiritual and creative sides, we run the risk of allowing those parts of our consciousness to become atrophied.

I have to say that although I didn’t remember the details of when I read this book as a kid, I can certainly see how the lessons have become a part of who I am. I value individualism and appreciate the differences in others. I understand the importance of continuous learning and challenging established beliefs. And finally, I believe that there are myriad undiscovered realms in the infinite universes which exist within us and around us.