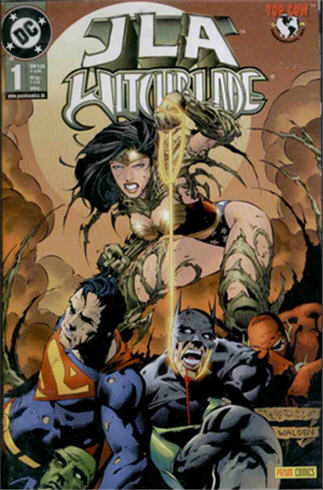 Several weeks ago, when I went to the comic store to pick up my latest issues, the woman working there told me that they had gotten this graphic novel as part of a collection they purchased. Since they know I am a Witchblade fan, they set it aside for me in case I was interested. The price was right, so I figured I would purchase it. It took me a while to get around to it, but this morning I finally got around to reading it and it was pretty good.

The graphic novel is a stand-alone story and was published in 2000. The basic premise is that Kenneth Irons has enlisted the help of Lex Luthor in acquiring the Witchblade. Sara is injured and taken the the Justice League headquarters for treatment. While she is there, the Witchblade determines that Wonder Woman is the more powerful female, hence more suitable bearer, and the artifact detaches itself from Sara and “chooses” Wonder Woman. The result is that Wonder Woman becomes corrupted by the weapon’s darker power and turns on the other members of the Justice League. At the climax, there is a confrontation between Sara Pezzini and Wonder Woman.

I found this tale to be entertaining and fun. There is nothing deep or thought-provoking, just a basic retelling of the classic “power corrupts” motif. There was some irony here that did not escape my attention, though. The women characters were definitely depicted as sexually idealized, which is annoying. But the irony is that at one part of the novel, Wonder Woman is addressing the United Nations, scantily clad and looking like a teen poster pinup, and talking about the importance of women opposing patriarchy and assuming leadership roles in the world.

… As you are all well aware, our mother planet faces grave economic, environmental and social problems; in order to solve them—I call upon women across the globe to rise up and throw off the yoke of patriarchal tyranny!

I was glad to see that there was at least an attempt to promote gender equality here, but as is evident, there is still a long way to go.