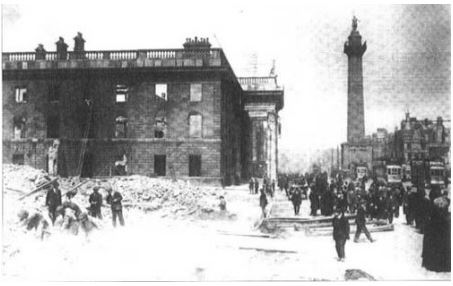 Since today is Easter, I decided to reread Yeats’ great poem regarding the Irish uprising against England on Easter in 1916. It is fairly long, so I am not going to include the entire text, but here is a link to the poem online should you want to read it in its entirety.

I will include the fourth and final stanza of the poem, since that is what I will focus my analysis upon.

Too long a sacrifice
Can make a stone of the heart.
O when may it suffice?
That is Heaven’s part, our part
To murmer name upon name,
As a mother names her child
When sleep at last has come
On limbs that had run wild.
What is it but nightfall?
No, no, not night but death;
Was it needless death after all?
For England may keep faith
For all that is done and said.
We know their dream; enough
To know they dreamed and are dead;
And what if excess of love
Bewildered them till they died?
I write it out in a verse–
MacDonagh and MacBride
And Connolly and Pearse
Now and in time to be,
Wherever green is worn,
Are changed, changed utterly:
A terrible beauty is born.

The stanza begins with references to sacrifice and stone. The leaders of the uprising sacrificed themselves for Irish independence, and there is a symbolic connection to the sacrifice made by Jesus in leading his followers to spiritual freedom. I see the reference to “a stone of the heart” as having multiple meanings. On one hand, the English government has hardened its stance against the Irish rebels; additionally, the Irish have become hardened in their stance against English rule. But also, since Christ was buried in a cave blocked by a stone, the stone becomes a symbol for the heart of the Christian faith and the promise of resurrection. Hence, although the rebel leaders are executed (like Christ was executed), the cause will continue in spirit and their martyrdom will be the rock or foundation of the revolution.

Yeats then continues by emphasizing the importance of murmering “name upon name” in order to keep the memory of the executed leaders alive. One gets the sense that Yeats is implying the need for a national invocation, where by chanting the names of the fallen leaders, their ideals and their spirit will become part of the collective consciousness.

Next, Yeats expresses how the rebels died for a cause, or a dream, and he ponders whether it was a “needless death” or whether their sacrifice was worth it. “England may keep faith” implies that Parliament will not change its stance against Irish independence and that likely a longer and bloodier struggle will ensue. It is also worth noting that 1916 was the middle of World War I, so I cannot help but wonder if Yeats viewed the struggle for Irish independence as a microcosmic symbol of the larger conflict that was ravaging Europe at the time.

Yeats decides to commit the story of the uprising to verse, and names the leaders who were executed:

This has strong symbolic significance. For Yeats, committing something to verse is instilling it with deep spiritual power, almost like making it immortal. So by immortalizing the martyred leaders, he is ensuring their rebirth and resurrection, guaranteeing that their cause will live on.

The last words are somber, though. He acknowledges that the revolution is important and right, but suspects that it is also symbolic of the end, in the same way that the resurrection of Christ, while glorious and beautiful, signals the beginning of the apocalypse. Compare the ending of this poem to the ending of “The Second Coming,” Yeats’ famous apocalyptic vision:

Are changed, changed utterly:
A terrible beauty is born.

And what rough beast, its hour come round at last,
Slouches towards Bethlehem to be born?