OK, the movie may be violent and graphic, but the comic totally trumps the film. This is just downright over-the-top. My guess is that there was a shortage of red ink after this comic was published.

In this issue, Dave assumes his superhero name of Kick-Ass. He also starts pretending to be gay so that he can be friends with a girl he’s attracted to—another brilliant idea, right? But the key part of this issue is when he accepts a request from a woman online to go and challenge her ex-boyfriend who is harassing her. The ex winds up being a drug dealer and a fight ensues. Enter a young girl in a costume who hacks up a few of the hoods. The issue ends with her standing defiantly, ready to take on the rest of the people.

So far, the comic and the movie are almost exactly the same, which is fine. I’d kind of hoped there would be some additional stuff in the comic, but so far that’s not the case. Still, I’m pretty excited about this series and looking forward to reading the next issue. Cheers!! 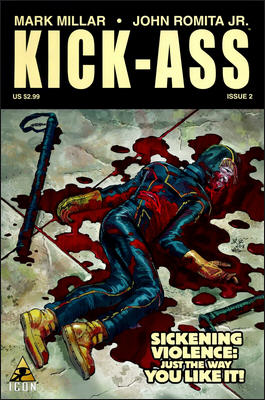 Last night I took my daughter to see “Kick-Ass 2” at the movies. It was good, almost as good as the original film. Anyway, it made me realize that I should read the next issue in the series.

The comic, like the film, is pretty graphic and not for the faint-at-heart. I mean, look at the cover. This is one of those instances where you really can judge the book by its cover. Despite the graphic violence, I do think that the comic has social value.

In this issue, Dave slowly recovers from the injuries he suffered while trying to be a real-life superhero. He vows never to do anything that stupid again, but like many of us, he finds himself going back and doing the one thing that he knows is really stupid. He criticizes his own stupidity as he dresses up and heads out again.

This time out, he defends someone who is getting beaten by a group of thugs. He gets beaten pretty badly, but manages to protect the person and fight off the hoods. What I found most disturbing about the scene, though, was not the violence, but the “innocent bystanders” with their cell phones, snapping pictures and video as the violence unfolds. No one bothers to step in and help, and this is a terrifyingly accurate portrayal of real life. It brought back images from the recent unrest in Turkey, particularly a photo I saw on a news site of a young woman, bleeding profusely, in obvious agony, and all around her were people with cameras and cell phones, recording her pain but refusing to assist her. I was disgusted.

Although I love social media and I think that it has revolutionized the way we interact with the world, it has also made some of us callous to suffering. We are bombarded with images of people suffering around the world. After a while, we have to tune it out. That is the dark side of social media and we must be vigilant about it.