“Love America and March for Peace” by Umberto Eco 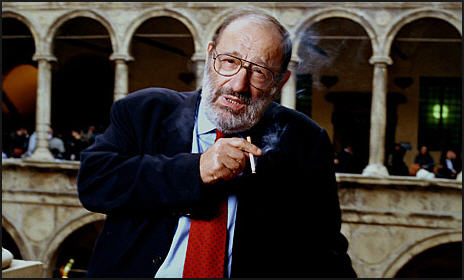 This essay is included in Turning Back the Clock and for me highlights the issue of people’s tendency to see complex issues as clear and simple. There is a new paradigm where individuals are expected to support one side or the other, regardless of any grey area that may exist. Examples: If you do not support the US war on terror, then you are an ISIS sympathizer. If you support Israel, then you are a fascist that supports the oppression of Palestine. If you do not condemn the officer who shot Michael Brown in Ferguson, then you are obviously a racist. This is all a manifestation of what I personally like to call the “football team” mentality. People pick a team or side and support their “team” regardless of what they or the opposing side does. Nowhere is this clearer than in politics nowadays. Support for political parties is more polarized than it’s ever been.

As Eco points out, this mentality leads to deeper social divides.

At the heart of these painful but not yet bloody rifts, you hear statements every day that lead inevitably to racism, of the type “All those against the war are allies of Saddam,” but also “All those who think the use of force is justified are Nazis.” Shall we try to think about this?

It seems that individuals love to label other groups as “Nazis” to emphasize that these opposing groups are crossing some moral boundary. The problem that I see in doing this is that it diminishes the memory of the atrocities that were actually perpetrated by the Nazis. For example, after a recent Supreme Court decision overturning a ban on gay marriage, the City Council here in Asheville displayed a rainbow flag to show support. Opponents of marriage equality immediately condemned the members of City Council and called them Nazis because they acted without their approval. Personally, I see no correlation between City Council’s hanging of a banner and the crimes committed in Nazi Germany.

This is all connected to the “with us or against us” mentality, where any opposition or questioning is immediately condemned.

These few observations are sufficient, I hope, to suggest that the situation in which we find ourselves, precisely because of the gravity, does not admit of clear-cut divisions or condemnations of the kind “If that’s what you think, then you are the enemy.” This too is fundamentalism. You can love the United States, as a tradition, as a people, as a culture, and with deep respect due to those who won on the field the rank of the world’s most powerful country. You can be deeply touched by the injury America suffered in 2001, but without denying the need to warn Americans that their government is making a mistake and that they should see our position not as a betrayal but as frank dissent. Not warning them means trampling on the right to dissent—the exact opposite of what we learned, after years of dictatorship, from our liberators of 1945.

I hope that this trend of vilifying those whose opinions differ changes soon. It’s very destructive and prevents human progress, and progress is essential. If we are not moving forward as a society, then we are most likely moving backwards.